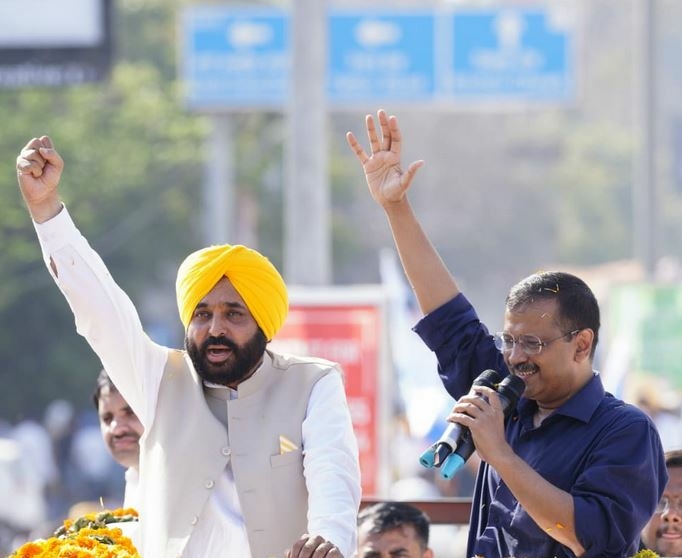 Aam Aadmi Party registered a landslide victory win in the recent Punjab Assembly elections while its 48-year-old comedian turned politician Bhagwant Singh Mann is set to become the second most important person in the party after Arvind Kejriwal. AAP clean-swept everyone in the border state. Bhagwant Mann, the party’s CM face will now see his political career catapult to great heights as he swears in as Punjab CM in the next few days.

The man swears by Bhagat Singh, uses inquilab zindabad as his catchword in rallies, and is always seen wearing the trademark yellow pagri. Born in Satoj village of Sangrur in 1973, Mann started his career as a comedian and gained popularity from his satires in TV show ‘Jugnu Mast Mast’. He also featured in several other comedy shows.

In 2011, he shifted politics by joining the Punjab Peoples Party led by Manpreet Singh Badal. In 2012, he fought the elections from the Lehragaga constituency but lost. Later, he joined the Aam Aadmi Party in 2014 and contested election from the Sangrur Lok Sabha seat. His importance in Punjab politics increased when he defeated veteran leader of Punjab Sukhdev Singh Dhindsa, who was then a part of Shiromani Akali Dal (SAD). Mann has been elected to the Punjab Lok Sabha seat of Sangrur for two terms in a row since 2014.

In 2017 assembly polls, Mann addressed over 300 rallies and became AAP’s most active man. His satirical anthems against the Badal family became highly popular. Mann’s popularity package had notoriety to it as well some MPs claimed he used to attend Parliament in an inebriated state even as some started calling him ‘Pegwant’ Mann.

Interestingly, in 2019, Kejriwal openly declared that Mann had quit drinking and was a changed sober, changed man. The perseverance paid off as as Kejriwal declared Mann as the party’s CM face for Punjab on January 18, putting to rest speculations that the former was vying to be the Punjab CM. Mann thanked Kejriwal for reposing faith in him. His sister Manpreet Kaur and mother Harpal Kaur, who were present on the occasion, thanked the people of Punjab.

While many may say that Kejriwal would still be the AAP pivot, Mann’s close confidants warn against dismissing him as a rubber stamp of the Delhi high command. As Mann’s supporters and party workers started celebrating the win, Kejriwal shared a picture of him with Mann showing a victory sign. “Iss Inquilab ke liye Punjab ke logon ko bahut bahut badhai (congratulations to the people of Punjab for this revolution),” the Delhi CM tweeted.