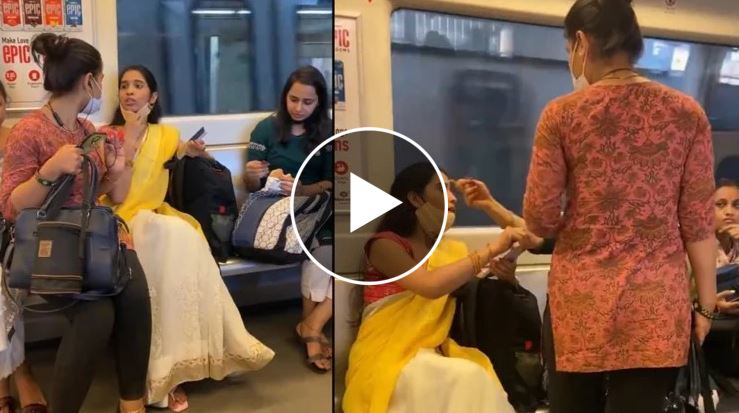 Women can be funny, ferocious, and calm at the same time. A perfect example of it was witnessed recently in a Delhi Metro where two women were seen arguing over a seat while a third one enjoyed her burger without caring about what was going on in front of her.

The video of two women fighting over seats in the Delhi metro started taking rounds on social media. A Twitter user shared a video where two women are seen arguing over a seating arrangement in Delhi metro. More than 5400 people have liked the video and above 184k people have watched it.

In the clip, a woman in a yellow saree is seated comfortably with her bag on an empty seat while a woman in an orange kurta struggles to find a seat for herself. The fight starts when the seated woman refuses to offer the empty seat and the other woman forcefully sits in the small space between the saree-clad woman and another passenger.

The seated woman is seen to claim that she has reserved the seat for someone and the other women protests that. While all this is going on another woman is seen seating calmly and enjoying her burger.

Netizens found the video amusing and even the unbothered woman who was eating a burger while two women were fighting beside her. “I want this calmness in life like that Burger girl,” a user tweeted.