The Real Mo Farah’: Meet Muslim Olympic gold medalist, who worked as domestic servant after being illegally trafficked to UK 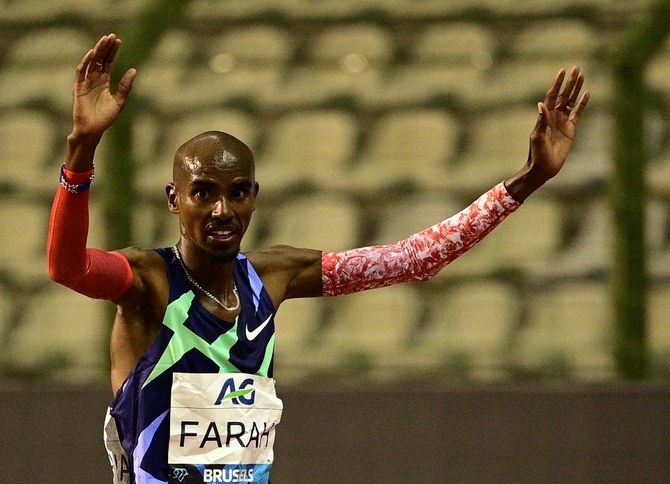 LONDON: He was illegally trafficked from Somalia. He worked as a domestic help before he  became a household name in Britain.

Born Hussein Abdi Kahin on March 23, 1983, in present-day Somaliland, he was trafficked from Djibouti to London aged 9 under the name of another child.

The Home Office, the British government department that handles immigration, has told BBC News that it will not investigate Sir Mo.

“It makes me relieved,” he told BBC Radio 4’s “Today” program. “This is my country. If it wasn’t for (my physical education teacher) Alan and the people who supported me throughout my childhood then maybe I wouldn’t even have the courage to do this.

“There’s a lot of people that I owe my life to —, particularly my wife, who has been very supportive throughout my career, and who gave me the strength to come and talk about it, telling me it’s okay to do this.”

Sir Mo has now made a documentary, titled “The Real Mo Farah,” about his experiences growing up, his journey to Olympic glory, and his career since running.

“It was always my story. I wasn’t even comfortable enough to talk about it with my family. I couldn’t talk about it publicly,” he said.

“It has taken me a long time to come to this, but I’m glad I’ve made this documentary to show people the reality of what happened to me as a child.”

But as Sir Mo details his story and his arrival to Britain, a wider conversation about immigration laws in the country has been sparked by his revelations.

“How generous,” said The Independent’s Harriet Williamson, referring to the Home Office’s decision to not investigate the Olympian.

“Here’s the thing — no victim should ever be afraid they will be penalized for a crime committed against them.

“But that’s where we are in Britain, in 2022, and Farah’s disclosures should force us to confront our attitudes towards people who come to this country as refugees, migrants, or victims of human trafficking.”

While Sir Mo gradually developed the courage to tell his story, he delivered it at an opportune moment, as a national conversation on migrants crossing the English Channel and updated laws on nationality and borders continue to fill the airwaves.

His autobiographical film was released soon after the government launched its controversial Rwanda deportation scheme for people crossing the Channel, regardless of their immigration status, which has attracted swathes of legal challenges and rebukes from immigration groups.

Amid the governing Conservative Party’s leadership election, candidate Jeremy Hunt has said he will back an extension of the scheme, which is popular among the party’s grassroots.

But does this mentality of blocking and deportation risk preventing the arrival of future Mo Farahs?

Williamson thinks this is the wrong question to be asking. “Using Farah’s achievements to justify him being welcome in the UK is part of the problem,” she said.

“It fosters a culture of exceptionalism and taps into damaging narratives about ‘the good immigrant,’ setting high bars for how immigrants and refugees should ‘earn’ a place in Britain.

“People deserve to be able to seek refuge and live in safety in this country, whether they win gold medals and entertain us — or not.”

Regardless of what the government does next with its immigration laws, Sir Mo’s “Hollywood” story will likely give ministers and campaigners pause for thought.

But Jim White, a journalist who knows Sir Mo well and interviewed him regularly during his meteoric rise, wrote in the Daily Telegraph that the reflections will not all be positive.

“There is … one depressing reality that remains. Imagine how many children there are out there, some of them in similar circumstances to those in which he found himself, being exploited in modern-day slavery,” White said.

“Sadly the odds are stacked against any of them growing up into quadruple Olympic champions.”