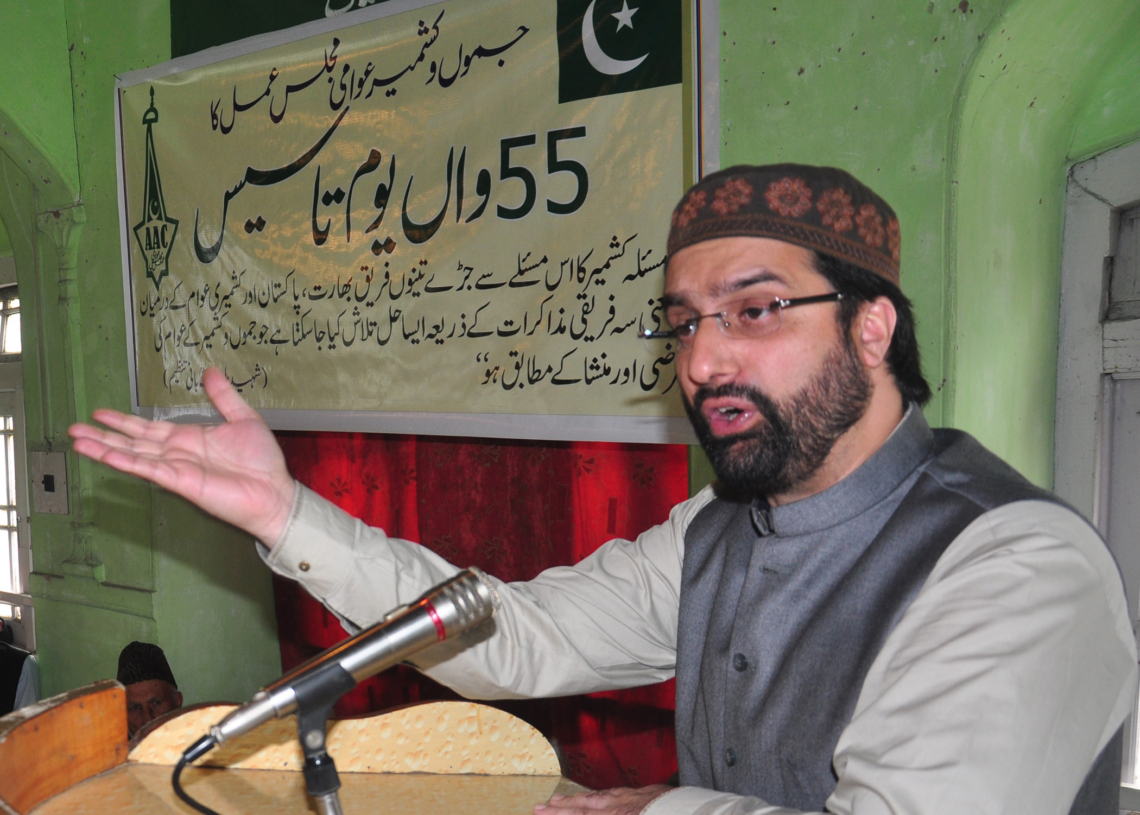 Srinagar, Jun 22: The 55th foundation day of Awami Action Committee (AAC) was observed as a ‘day of pledge’ at the AAC headquarters, Mirwaiz Manzil Rajouri Kadal.
The foundation of AAC was laid by the Shaheed-e-Milat late Mirwaiz Moulana Muhammad Farooq exactly 55 years ago with a sole aim of achieving right of self-determination for the people of Jammu and Kashmir.
According to the statement issued, inspite of Govt forces turning downtown into a military fortress, hundreds of workers and activists who had come from various parts of Kashmir, assembled at Mirwaiz Manzil Rajouri Kadal to take a pledge for fulfilling the mission of the martyrs.
The function was presided over by the AAC patron and Hurriyat Conference (M) chairman Mirwaiz Umar Farooq wherein various speakers highlighted the 55-year-long contributions of AAC leaders, activists and workers towards the ongoing movement of right to self-determination.
In his presidential address, Mirwaiz while talking about the role and responsibility of AAC stated that Kashmiri nation is offering priceless sacrifices for a great and sacred cause for the past seven decades and over this period, history of sacrifices have been created. Mirwaiz said that AAC is pursing the mission of which the foundation was laid by the Muhajir-e-Milat Moulana Mirwaiz Muhammad Yousuf Shah (RA) in 1931 when he formed the Muslim Conference. He said in 1964, the Shaheed-e-Milat constituted the AAC to infuse a new wave of energy into the Kashmir movement.
Mirwaiz while urged the AAC members, and activists to forge unity among their ranks and remain steadfast. Mirwaiz said that since 1947 every policy of running and ruling Kashmir has been made and implemented directly by New Delhi so change of face or guard will not make any difference unless there is change of policy he said that the fact remains that the State is actually ruled and governed by the forces from the day they landed here. Mirwaiz regretted that all the parties who have ruled Kashmir since 1947 have acted as collaborators and willing tools in the hands of New Delhi and always followed their diktats rather than standing up for the rights of the people of J&K
Mirwaiz said the more repressive measures GoI and its agencies would employ to muzzle the genuine struggle, the more our resolve to fight oppression would become strong.
Mirwaiz said that the Kashmir movement has witnessed a transition as today our fourth generation is on roads demanding their birthright which reflects that nation is not going to surrender no matter how tough the repression would be.
Mirwaiz said that pushing youth to the wall and using ultimate repression against them is destined to boomerang and take an ugly shape. He said it was unfortunate that the New Delhi instead of accepting the ground realities and acknowledging the basic political aspirations of people of Kashmir is handling the issue militarily, which is fraught with dangerous repercussions.
He said policy of repression has become a routine affair of the authorities in Kashmir and as everyday young boys are killed maimed and blinded, resistance leadership is caged in their own homes, youth harassed, properties vandalized and protestors showered with bullets and lethal pellets. He said that international community has finally woken up to the worsening human rights situation in Kashmir as the recent UN report on the Kashmir has a taken the id off the gory cases of rights abuses and direct intervention of world bodies has now become highly inevitable.
Mirwaiz paid tributes to the all the martyrs of Kashmir struggle including those killed in government forces action today. Mirwaiz also lauded the courage and patience of thousands of prisoners lodged in various prisons in and outside the state stating that majority of Kashmiri prisoners are deprived from basic medical facilities which is a big area of concern.
Those who spoke on the occasion include G.N.Zaki, M. Shafi Khan, G.Q.Beg, Pir Ghulam Nabi, Mushtaq Sofi and others.