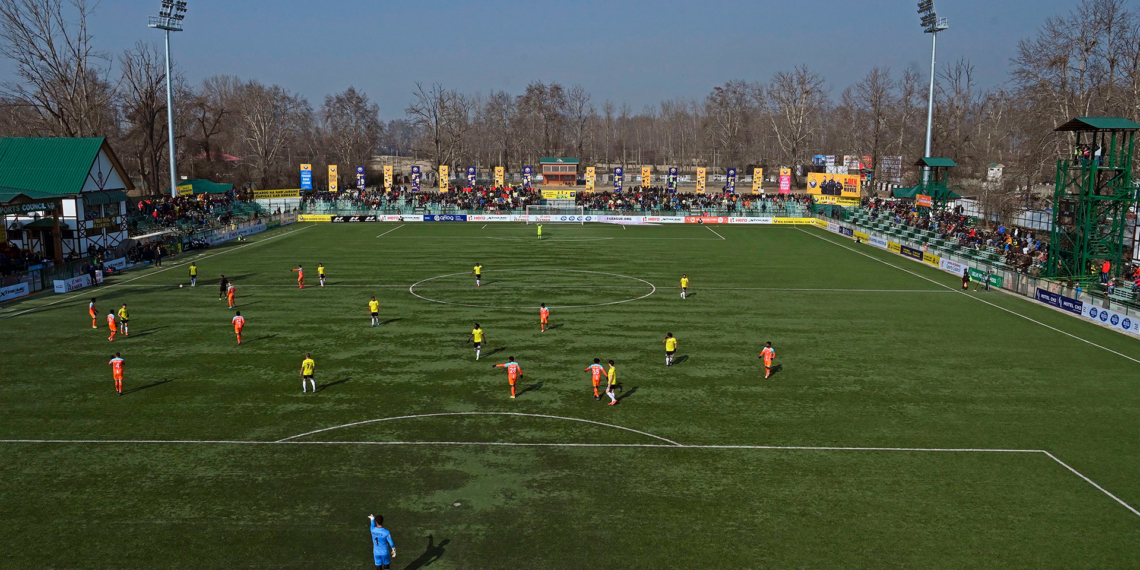 Post-Covid lockdown, Kashmir valley is witnessing a boom in sporting activities. It is good to see children and youth in good numbers taking part in various sporting activities ranging from martial arts to football. Football seems to be the most favorite sport among youngsters as several tournaments are presently being played across the Valley. The flood-lit grounds of Srinagar city are witnessing a lot of buzz in the evenings that host matches of mohalla level tournaments or the ongoing 2nd Phase of Premier UT League 2020-21. At the same time, youngsters are taking a keen interest in sports forms that were hitherto unknown to Kashmir.  The games include lawn tennis and squash that are played at Gindun Stadium, Raj Bagh under the aegis of the Jammu and Kashmir Sports Council. Nehru Park too is abuzz in the mornings where the Water Sports Centre is keeping the kids busy with kayaking and canoeing. Water sports are played under the supervision of national kayaking and canoeing coach Bilquis Mir. Before the Covid lockdown, the Indoor Sports Stadium too was packed in the mornings where a good number of both young and middle-aged persons were seen playing sports like badminton or martial arts. During the last two years, youngsters were not able to take part in sports activities due to the Coronavirus pandemic. Staying confined to homes had led to boredom and even mental health issues among the youth. Now, more youth are showing keenness to participate in sports than before. It definitely is a good sign!

Though the sports council had earlier this month launched a comprehensive sports calendar and the government has already announced plans to engage 15 lakh youth across Jammu and Kashmir in various sports activities, a lot more needs to be done. The overall sports infrastructure needs much improvement. Kashmir valley does not have enough sports centers and grounds. And on top of that, a ground or a sports center should have adequate facilities. In western countries, sports facilities are usually just a stone’s throw away from any locality. Even in metropolitan cities of the country, sports infrastructure has vastly improved over years. Unfortunately, Kashmir lacks these facilities. For example, there is no public swimming pool here.

There are just a handful of pools in private hotels or clubs that are inaccessible to the general public. And these are not Olympic-sized swimming pools either that conform to regulated dimensions where tournaments can be held. How will we produce swimmers that can compete at the national level if there is no public swimming pool in Kashmir worthy of training or holding a tournament? Unfortunately, the proposed swimming pool at the Gindun ground has been awaiting completion for the past many years. The same is the case with other sports. Besides lack of infrastructure, promising sportspersons do not get the desired patronage from the government or private players. Of late, cyclists from Kashmir valley have achieved a good amount of success. Take the case of cyclist Bilal Ahmad Dar from Chek-i-Kawoosa, Narbal in Central Kashmir’s Budgam district for example. The cyclist had set a national record in the ‘Ind pursuit 3 km’ Under 18 category during an event in 2018. The next year in 2019, he won a silver and bronze medal at the Junior Asian Track Cycling Championship in Indonesia. Dar had earlier won four gold medals in the national school games in 2017 and former cricketer VVS Laxman had even tweeted about his achievements. “Congratulations Bilal Ahmad Dar from Budgam, Kashmir for achieving the milestone of winning four Gold medals in a single championship. Slowly emerging as one of the top cyclists of the country. Proud!” Laxman had then tweeted. Unfortunately, Dar remained an unsung hero and later struggled to get better sponsors while he continued to train at the National Cycling Academy, New Delhi. Several other cyclists too had shown a lot of promise but there is no proper training facility for them in Kashmir. And all cannot travel to New Delhi for training. There are several other cases where sportsmen have shown promise but then they did not receive much support from the concerned quarters. Kashmir in the past has produced quite a few national-level footballers that even played for Team India and it is good to see the players of this popular sport getting support from institutions like the J&K Bank. However, the government and other institutions also need to support promising players of other sports.

It is also important the government supports players of recognized sports only that are played at the Asian Games or similar tournaments. Later on, they can win medals at the national and international sports tournaments if properly groomed. Unfortunately, it has been noticed that at times, players of unrecognized sports get undue attention and encouragement. At the same time, the government should focus more on building a strong community sports model where sporting assets are looked after by the local citizens. There have to be more grounds at the community level with required facilities. It is even cumbersome for a player living in Srinagar outskirts to travel to a place like the Indoor Stadium or Gindun in the morning if he/ she wish to join martial arts or lawn tennis coaching classes. And it is going to be more cumbersome for players from rural areas of the Valley. Due to lack of facilities, youngsters, later on, are unable to pursue their passion for a particular sport. On paper, lots of plans are made. But, these plans need to be properly executed. Budding players can only pray and hope that the government practically implements all its promises and plans regarding the development of sports infrastructure in Jammu and Kashmir.