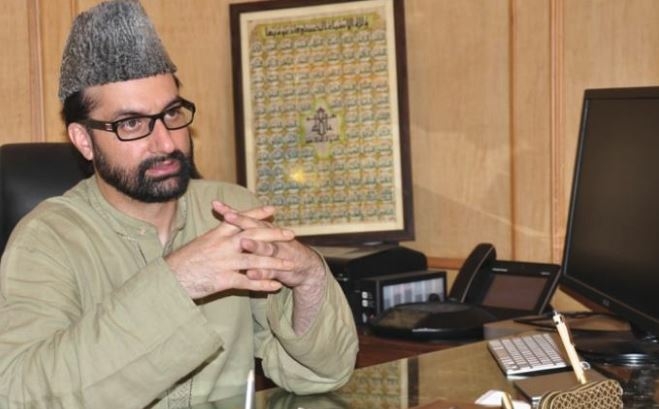 Srinagar, Feb 19: A meeting of Hurriyat Conference (M) Executive Council presided over by the amalgam chairman; Mirwaiz Umar Farooq was held here at APHC Rajbagh Hqtrs and attended by the Executive Members Prof Abdul Gani Bhat, Bilal Gani Lone, Muhammad Musadiq Adil and Mukhtar Ahmad Waza.
According to the statement issued, the meeting of the Hurriyat Executive Council could not be held due to the often and repeated house detention of amalgam’s chairman Mirwaiz.
The meeting discussed the present political situation in Jammu and Kashmir and took stock of the organizational affairs besides issues confronting the resistance movement.
The Executive Council castigated the government for frequently caging Mirwaiz in his residence and barring him from carrying out his political, religious and social obligations and termed it as autocratic mindset of the ruling regime.
The meeting expressed serious concern over the unending bloodshed, killing of innocents, harassment of youth, frequent searches in every nook and corner of Valley and the reign of terror unleashed by the government forces under the patronage of ruling regime stating that history is witness that no genuine struggle can be crushed through military might. The meeting observed that such repressive measures can’t neither break the resolve of resistance leadership or people of Kashmir.
The meeting also discussed the measures to make APHC more vibrant and enhance its functional capacity by increasing political activities and contacts with the people. It was said in the meeting that the political stand of APHC in line with it constitution has always proved to be effective and genuine.
Expressing concern over the situation of confrontation among the powerful nations of South Asia, the participants said that to protect the human values and dignity of humankind. It is time to avoid confrontation and take concrete steps to resolve the vexed issue by means of a sustained and meaningful dialogue with active participation of all the stakeholders.
The meeting said the resolution of Kashmir issue is imperative to end the sufferings, pain of people and political uncertainty of the region.
The Executive Council also prayed for the early recovery of its Executive member Masroor Abbas Ansari who recently underwent a complicated surgery and expressed hope that he will soon resume his responsibilities at political and social levels.
At the end of the meeting the participants condemned the killing of a mentally challenged elderly person Syed Habibullah of Soibugh, Budgam stating that forces even don’t spare the mentally disabled person which is highly reparable.

SSA teachers protest against delay in release of salaries