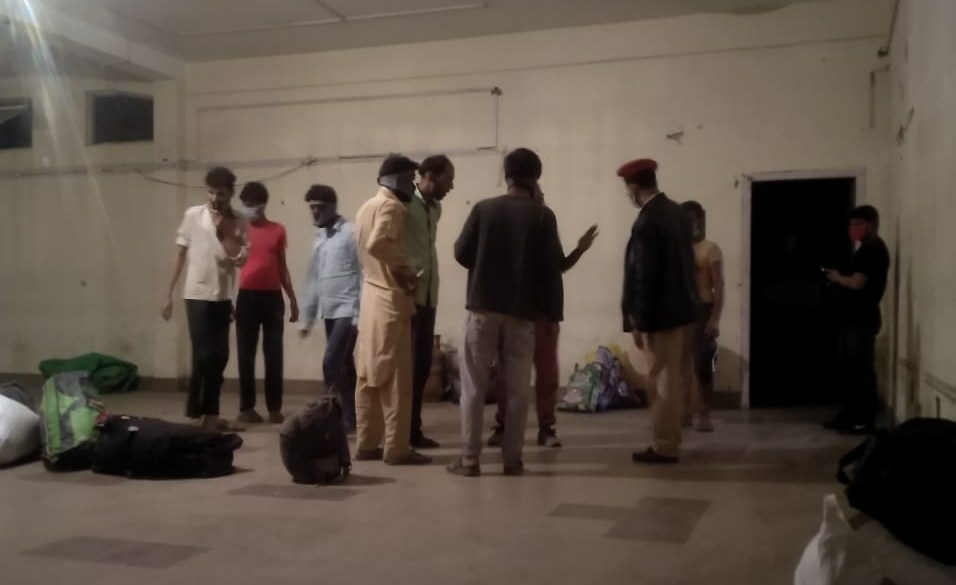 Labourers shifted to a police camp after they were attacked by goons at their rented place in Assam on May 4, 2020 (Photo: KM)

Srinagar: At around 8:30 pm on Monday, Iqbal Ahmad, 30, was preparing for dinner along with other Kashmiri labourers after breaking their fast when suddenly their electricity went off in Cachar district of Assam.

Within minutes, a group of people stormed their rented room and attacked the inmates. Five labourers were injured in the incident

“It was a pre-planned attack. First, our electricity was disconnected then people armed with bamboo sticks stormed our room. My mind could not decide where to hide. They smashed everything that came in their way,” Iqbal recalled.

Iqbal, a resident of Kupwara district is working as a labourer along with 24 other Kashmiris in Cachar. Since COVID-19 lockdown they are stuck in Assam as inter-state travel has been banned to prevent the spread of the novel coronavirus.

“After knowing that we are Kashmiri they thrashed us with bamboo sticks.  They shouted, `Tum logo ko koi haq nahe hai yaha rehne ka’ (You guys have no right to live here). We were pleading them to let us go,” he said

Five people were injured in the incident. Later, some people came to their rescue and informed the local police which shifted them to their camp.

Iqbal and other labourers have appealed to the government of Assam and J&K to evacuate them to their homes. “Although police rescued us from the goons, we live in constant fear. This place is not safe for us anymore. We request the concerned authorities to help us to go back to our home,” he added.

Superintendent of Police, Cachar district, Manabendra Dev Ray said they have taken the notice of the incident and shifted Kashmiris to a safer place

“They are in the protection of the police. They are all safe and few suffered minor injuries.  We have arrested one person and FIR under section 323 IPC (voluntarily causing hurt) has been registered against him. We have taken up the matter with the higher officials and they are planning to evacuate stranded Kashmiris back to their homeland,” Ray told The Kashmir Monitor over the phone.

LG reviews functioning of Edu dept; all institutions to remain closed till May 31