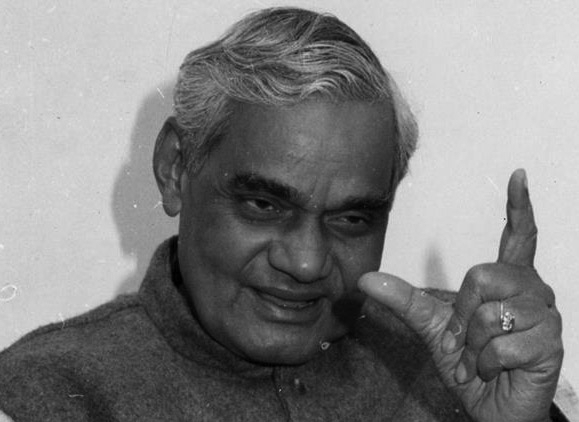 New Delhi, August 16: Central Government announces seven day state mourning throughout India, during this period the national flag will be flown at half mast throughout India where it’s regularly flown.
State funeral will also be accorded.

Governor N.N. Vohra has expressed grief over the sad demise of former Prime Minister Sh. Atal Bihari Vajpayee. Paying tribute to the former Prime Minister, with whom he had the privilege of working for some time, Governor described him as an astute and visionary leader whose thinking was deeply infused by humanism. He recalled Sh. Vajpayeeji’s continuing endeavor to evolve an amicable resolution of issues relating to Kashmir.
In his message Governor has prayed for peace to the departed soul and strength to the bereaved family members.
National Conference President and Member Parliament for Srinagar, Dr. Farooq Abdullah and Vice President Mr Omar Abdullah on Thursday expressed deep grief and sorrow over the passing away of former Prime Minister of India Mr Atal Bihari Vajpayee.
Dr Farooq Abdullah paid glowing tributes to the departed leader and extended his heartfelt condolences to the bereaved family.
Highlighting Late Vajpayee’s exemplary contributions in serving the people of the country Dr Farooq Abdullah said, “In his demise, country has lost not only an exemplary politician but a visionary too. His golden words on Kashmir would be remembered for all times to come.”
Calling Late Vajpayee’s political career nothing less than a template for others to follow and imbibe Dr Farooq said, “He will be remembered not only for his clear political thought but also the way he engineered out of the box initiatives on Kashmir. He still remains as one of the few politicians who has a huge fan following in Kashmir.”
While paying homage to departed leader, the NC Vice President termed former PMs death ‘a personal loss’. “Late Vajpayee ji was a gentleman par excellence. His path breaking initiatives to resolve Kashmir conundrum is something that needs no explanation. His statesmanship was legendary and unparalleled in modern times,” Mr Omar said.
The NC Vice President extended deepest condolences to his family and prayed for peace to departed leader.
Both Dr Farooq Abdullah and Mr Omar Abdulaah had earlier visited the ailing leader at AIIMS, New Delhi.
People’s Democratic Party today condoled the demise of Veteran leader and former Prime Minister Atal Bihari Vajpayee. Rafi Ahmad Mir, Party’s Chief Spokesperson, said that, PDP President and former Chief Minister Mehbooba Mufti presided over a condolence meeting paying rich tributes to Atal Bihari Vajpayee. According to the Chief Spokesperson, Mehbooba said that Vajpayee’s demise is an end of an era where he always showed courage and conviction in healing Kashmir through his reconciliatory measures.
Mehbooba termed Vajpayee as the crusader of peace who understood Kashmir and initiated a series of CBMs for people of Kashmir, respecting their sentiments. She termed the death of Vajpayee as loss to politics of Sub continent stating that his peace endeavors greatly improved the peace situation in Jammu and Kashmir.