Hitler’s watch sold for $1.1 million in US auction: Know who bought it 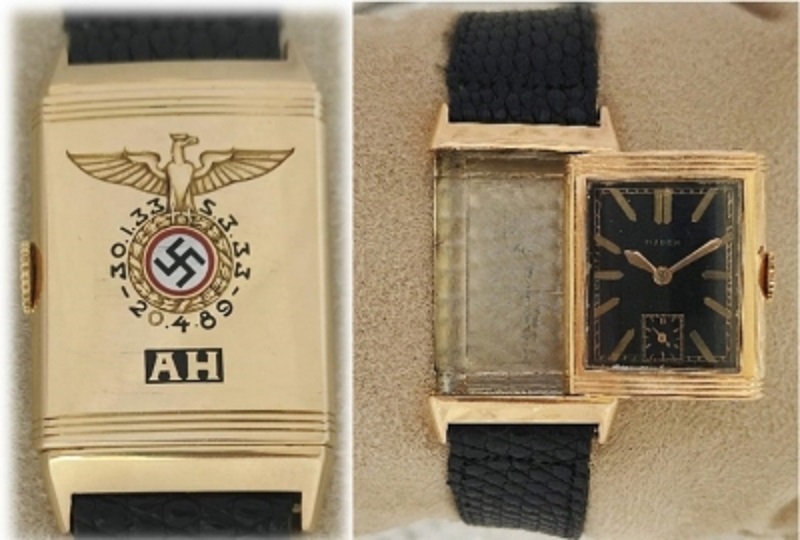 Nazi dictator Adolf Hitler’s watch sold for a whopping $1.1mn at a US auction

Nazi dictator Adolf Hitler’s watch sold for a whopping $1.1 million at an auction in the US despite apprehension by members of the Jewish community, a media report said.

The timepiece made by German watch firm Huber, which has a swastika and the initials AH engraved on it, was sold to an anonymous bidder at the Alexander Historical Auctions in Maryland, according to the BBC. Hitler’s watch is one of the many other things that have been antiquated by several institutions across the world.

The auction house which deals with historic autographs, documents, and photographs, militaria from all conflicts, and important relics, says the watch was given to Hitler most likely on April 20, 1933, on his 44th birthday when he became the Chancellor of Germany.

“The watch and its history have been researched by some of the world’s most experienced and respected watchmakers and military historians, all of whom have concluded that it is authentic and indeed belonged to Adolf Hitler,” the auctioneer said in its product catalogue.

It also said that Hitler’s watch was taken as a war souvenir when a group of some 30 French soldiers stormed the Berghof, Hitler’s mountain retreat on May 4, 1945.

Among the members of the group was Sergeant Robert Mignot, who returned to France with the watch, resold the timepiece it over to his cousin, according to the auction house.

Hitler’s watch has remained in the exclusive possession of the Mignot family and has never been offered for sale before, it added.

But an open letter signed by 34 Jewish leaders described the sale as “abhorrent” and called on the Nazi items to be pulled from the auction, which also included a dress that belonged to Hitler’s wife Eva Braun, autographed pictures of Nazi officials and a yellow cloth Star of David imprinted with the word “Jude”, which is German for Jew.

Rabbi Menachem Margolin, chairman of the European Jewish Association said the transaction gave “succour to those who idealise what the Nazi party stood for”.

Speaking to German media before the sale, Alexander Historical Auctions’ Senior Vice President Mindy Greenstein said that its aim was to preserve history, and that most sold items are kept in private collections or donated to Holocaust museums.

“Whether good or bad history, it must be preserved,” the BBC quoted her as saying to Deutsche Welle.

“If you destroy history, there is no proof that it happened,” he said.

Documents supplied by the auction house state that it cannot provide proof that Hitler actually wore the watch. But an appraisal by an independent specialist concluded that it “in all likelihood” belonged to him. Despite the watch fetching over $1m it fell short of the auction house’s $2m to $4m estimate, Deutsche Welle reported.

Adolf Hitler was the leader (Führer), or unchallenged dictator, of Germany from 1933, when he came to power, until April 30, 1945, when he committed suicide in his bunker in Berlin.

Born in Austria in 1889, he was initially unsuccessful in life, becoming a semi-vagrant in pre-WW1 Vienna. He fled Austria in 1913 and served in the German army during World War I. He became the leader of the German right-wing extremist National Socialist German Workers Party (known as the Nazi Party) in the early 1920s.

A charismatic speaker, Hitler espoused radical nationalism and virulently anti-Semitic views, based largely on the false concept that Jews were responsible for Germany’s defeat in World War I, and that Germany’s greatness would be restored by the elimination of Jews and other inferior races as well as political opponents of Nazism and other undesirable elements from society. Hitler’s basic ideology was set out in his book, Mein Kampf (My Struggle), published in 1925-26, which he began writing while in prison following the failed Beer Hall Putsch in November 1923.