When a cat ‘graduated’ from US college… 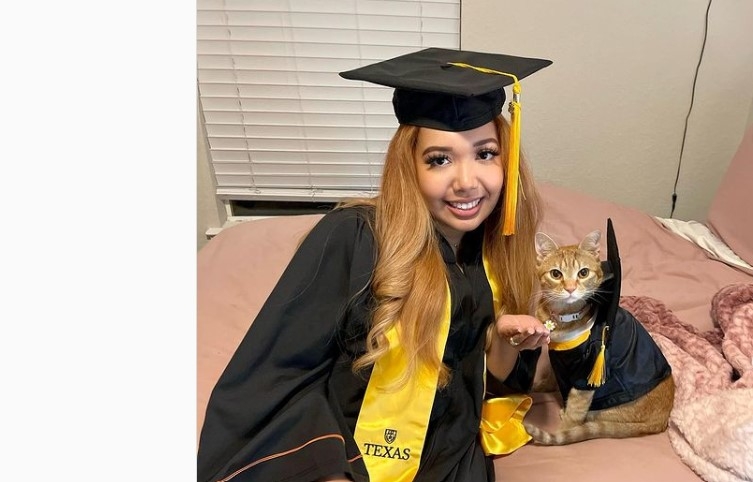 According to Fox7, Francesca Bourdier recently graduated from the University of Texas at Austin, however, she wasn’t alone in achieving the milestone, as her adorable pet cat, named Suki, also joined the fresh graduates after attending online classes with her owner.

Taking to social media, Bourdier shared heart-melting pictures of her and her four-legged partner dressed up for the graduation ceremony. In the caption, she wrote, “My cat attended every zoom lecture I had so we will BOTH be graduating from THE University of Texas at Austin together.”

Since being shared, the Instagram post has gone viral. Several internet users rallied behind Suki’s recent achievement and adorable graduation attire. The university too responded to her post saying, “Congratulation to you both.”

“Only here because I saw you two on the news and I myself am a crazy cat lady who’s obsessed with this entire situation,”  said a user

Another said, “Ended up in my feed via a different account and had to come to find the original. This made my day! Congratulations!”

“This is the cutest and most original thing I’ve seen in a while! Congratulations to the both of you!!” added third.

Speaking to Fox7, Bourdier disclosed that due to the Covid-19 pandemic, she was forced to spend the majority of her college experience at home. “I was pretty much at my apartment for most of the time and I had my cat next to me. Whenever I would have my Zoom lecture on, it’s like she almost wanted to listen in on it, and she would always just sit by my laptop,” she said.

Bourdier added that when graduation day arrived, she acknowledged Suki’s dedication and thought of including her in the ceremony. “She’s (Suki) just kind of my special graduate,” she told the media outlet.

Further, she revealed that through a quick search online, she was able to buy Suki her cap and gown that matched almost exactly. She said that she wanted to make her cat an honorary member of the University of Texas spring 2022 graduating class.

However, Bourdier added that even though Suki did not receive any graduating degree, she was happy to find her at every stage that led that day.