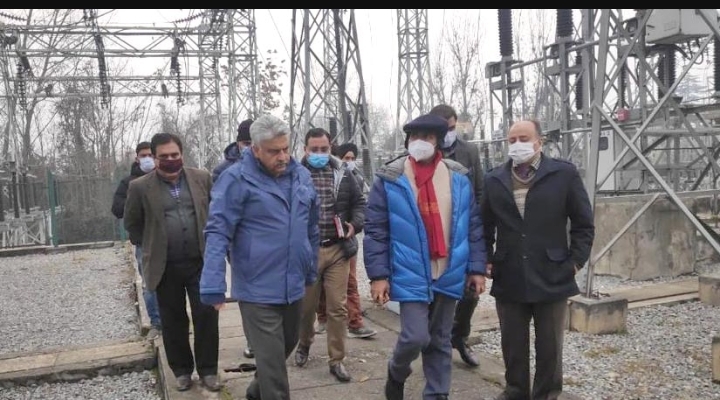 Chief Engineer JKPTCL along with Executive Engineers and other concerned officers attended the meeting.

Principal Secretary reviewed progress on transmission projects being executed in the Valley and emphasized timely completion of all ongoing projects.

Chief Engineer highlighted the achievements recorded by the Corporation, so far, besides presenting status of progress on various ongoing works of JKPTCL. He also apprised the meeting of upcoming projects in the transmission sector in J&K.

The notable achievements of current financial year which were highlighted during the meeting included up gradation of installed capacity at 220/132 KV and 220/33 KV levels from 1920 MVA to 2340 MVA, augmentation of GSS Delina from 160 MVA to 320 MVA at 220/132 KV level, under progress works on 2nd augmentation from 320 MVA to 480 MVA which is expected to be commissioned by February 2022. It is for the first time that two augmentations of any Grid Sub Station have been undertaken in one year.

The meeting was informed that, for the first time in the valley, a GIS has been commissioned at 220/33 KV and conventional ACSR on any 132 KV Transmission Line has been replaced by the state of art HTLS conductor to enhance the current carrying capacity of the conductor by about 1.75 times. Besides, ACSR of 132 KV Delina-Amargarh Transmission Line has recently been replaced by HTLS conductor and 132/33 KV GSS Amargarh has recently been augmented from 97.5 MVA to 135 MVA. Also, 220/132 KV GSS Mirbazar is being augmented from 320 MVA to 475 MVA which is expected to be completed by January 2022.

Principal Secretary also reviewed progress on modernization and up gradation of various Grid Sub Stations under the Centrally Sponsored Scheme PSDF. He was informed that 27 projects in 22 Grid Sub Stations of the Valley have been taken up under the scheme at a cost of Rs146.11 crore while 24 projects have already been completed.

He was further informed that 24 out of the 30 projects have already been completed under the Centrally sponsored PMRP-2004 scheme amounting Rs. 835.94 crore and works on rest of the projects are under progress. Under the Centrally Sponsored PMDP-15 scheme worth Rs 414.44 crore, a total of 17 projects have been taken up for execution, out of which, 07 have been completed and rest of the projects are in the final stage of completion.

Similarly, the meeting was informed that a total of 41 works amounting Rs 186 crore have been taken up in hand and 39 works are targeted for completion during the current financial year under the CAPEX budget 2021-22.

He also asked the concerned officers for ensuring completion of all CAPEX works by March 2022.