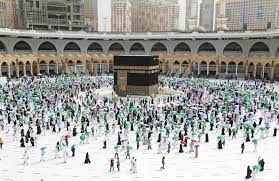 Riyadh: Saudi Arabia is bracing up to host over 10 million Muslim pilgrims in the new Umrah season.

“It is expected that over 10 million Umrah pilgrims will enter [the kingdom] in the Hejira year 1444 and they will enjoy constant care from the Ministry of Hajj and Umrah,” Hani Al Omari, a member of the National Committee for Haj and Umrah was quoted as saying by the Gulf News.

The first phase of the plan, which began on October 4, allowed 6,000 daily pilgrims from inside the kingdom to enter the Grand Mosque in Makkah.

The second went into effect on October 18, allowing about 40,000 worshipers and 10,000 pilgrims per day to enter the site.

Up to 20,000 pilgrims and 60,000 daily worshippers were allowed into the mosque according to the third phase that started in November. Ramadan is usually the peak of the Umrah season.

In March, Saudi authorities lifted most COVID-19 restrictions. This included scrapping physical distancing among worshippers at the Grand Mosque in Makkah and the Prophet’s Mohammed Mosque in Madinah.