Killing of Al-Badr chief a major jolt to militancy: IGP 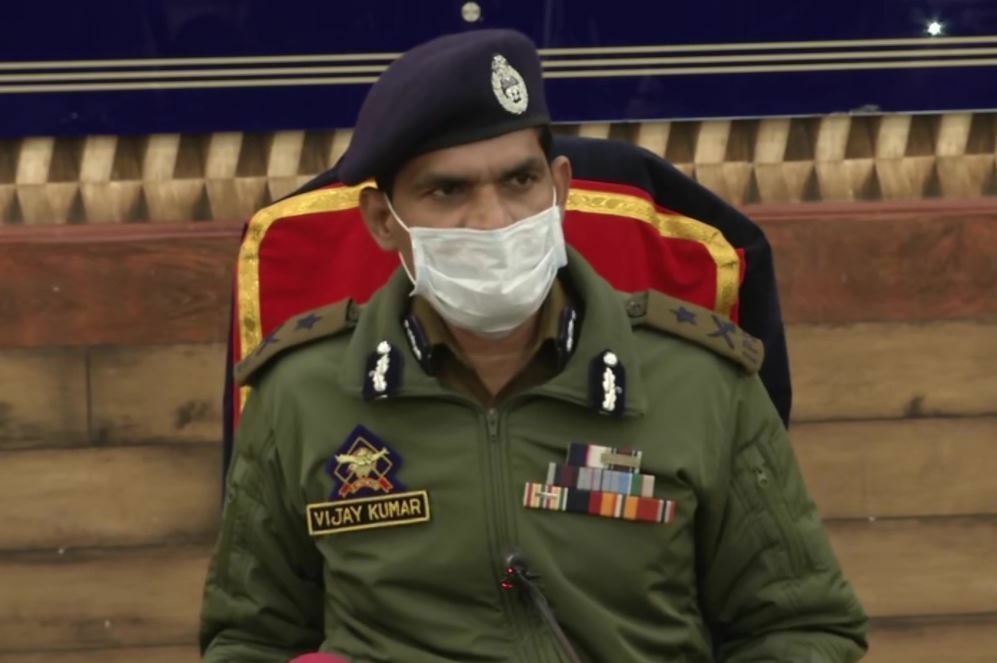 Srinagar: Inspector General of Police (IGP) Kashmir Vijay Kumar Wednesday said that the killing of Al-Badr chief Gani Khawja has caused a major jolt to militancy in north Kashmir as the slain militant commander was instrumental in recruiting youth into militancy and receiving new groups from across the LoC.

The IGP Kashmir also said that Awantipora police has achieved a major success by busting two militant modules of Lashkar-e-Toiba and Jaish-e-Muhammad by arrested seven new militant recruits including a B.A. first year student, who were planning IED and Fidayeen attacks in South Kashmir.

Addressing a press conference at police control room (PCR) Srinagar, the IGP Kashmir as per news agency—Kashmir News Observer (KNO), said that the killing of Al-Badr chief Gani Khawja is a major success for the security forces. “Sopore police received a tip-off yesterday and laid a cordon after which an encounter broke out in Tujjar area. CRPF and army later joined in.

Two militant associates of Khawja managed to flee when cordon was laid,” the IGP Kashmir said, adding that “in the ensuing gunfight, Khawaja was killed. He was a senior militant and had crossed over to Pakistan in 2000. He returned in 2002 and was active for five years. Police arrested him in 2007 and he was booked under PSA. In 2008 he was released. Till December 2015, he was working as OGW. In January 2018, he became active with Hizb. In 2020, he joined Al-Badr as its chief.”

The IGP said that Khawja was instrumental in recruiting youth into his outfit. “He would also receive new militant groups in north Kashmir and also help them to reach South Kashmir districts. He would provide logistics support to militants and his killing is a big success for police and security forces,” the IGP said as per KNO.

From the possession of slain Khawaja, one AK-47 riffle, 5 magazines, two grenades and other incriminating material was recovered. The IGP Kashmir also said that police achieved a major success by busting two big modules of Lashkar and Jaish, who were planning IED or Fidayeen strikes in South Kashmir areas.

“Awantipore police foiled a bid wherein Jaish module was planning to carry out vehicle based IED. We arrested a B A first year student, who was motivated through social media applications (Sahil Nazir of Pampore). After interrogating him, four more youth were arrested. A vehicle bearing number JK O1 E 0690 was also recovered that was supposed to be used for carrying out a car bomb,” he said.

During the interrogation, Sahil confessed that they were supposed carry out a vehicle based IED with the help of an OGW from north Kashmir.

In another success, the IGP said that a Lashkar module headed by Lashkar militant Umar Khanday, who was involved in Baghaat, Srinagar attack, had persuaded one Musaib Ahmed from Pampore. “We arrested Musaib and he revealed that at his home there was a container carrying 25 kgs of ammonium power that was supposed to be used as IED.

During his interrogation, he revealed that the remaining material was supposed to reach from north Kashmir. On his lead, one more youth Shahid Sofi was also arrested. They were planning an explosion at MC building Pampore. In total, seven new militant recruits were arrested in two modules that stand busted,” he said, adding that further investigation is on. “These youth were motivated through social media networks and handles from across,” the IGP said.

He said militants are changing their strategy to attack forces. “We are alert and plugging the loopholes after conducting security reviews on regular basis,” he said—(KNO)