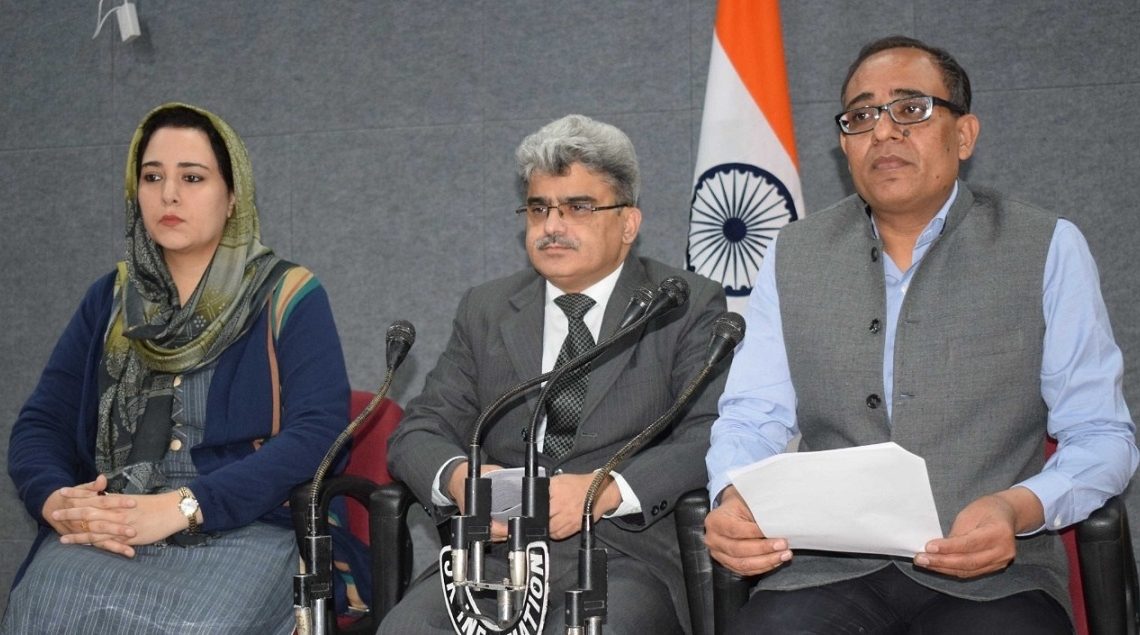 Jammu, Mar 18:  The government Wednesday decided to suspend the yatra to Shri Mata Vaishno Devi Shrine besides suspending inter-state buses coming to and going from J&K till March 31, 2020 in view of the prevailing situation emerging due to COVID-19 in the Union Territory of Jammu & Kashmir.

This was stated by Principal Secretary Planning, Development and Monitoring, Rohit Kansal, who is also the goverment Spokesperson at a press conference here on Wednesday. Financial Commissioner Health & Medical Education, Atal Dulloo and Director Information & PR, Dr. Syed Sehrish Asgar were also present during the occasion.

Urging people to contribute in tackling the situation, Rohit Kansal appealed to general public that there is no cause of panic and the cooperation of citizens is must in combating the situation successfully.

Giving a detailed break up about the Corona virus suspected cases in UT of J&K till date, Rohit Kansal informed that 2802 persons have been enlisted for observation among which 2128 have been kept in home quarantine, 28 in hospital quarantine whileas 346 are under home surveillance.

Kansal added that 300 persons have completed their 28 day surveillance period. 145 samples of suspected cases have been sent for testing so far out of which 118 have been reported negative, 03 are positive while as report of 24 is still awaited.

Spelling out measures being taken up to control and prevent spread of this Virus, Rohit Kansal informed that the yatra to Shri Mata Vaishno Devi Shrine has been suspended till March 31,2020. He also appealed all religious leaders to suspend all kinds of religious gatherings till March 31,2020.

Appealing foreign visitors not to visit J&K, Kansal said that all the foreign tourists or visitors arriving in J&K will be quarantined besides 100% quarantine will also be enforced on all the travellers coming from Union Territory of Ladakh. Kansal added that the government has also decided to operationalise 100% checking of passengers at Banihal Railway station while as all inter-state buses coming to or going from J&K have been suspended till March 31,2020.

Urging people not to pay heed to rumors, Rohit Kansal said that the government advises people not to panic and to rely on the information released by the government in this regard. He reiterated that citizens must take basic precautions such as personal hygiene, hand washing, coughing and sneezing etiquettes and also report any symptoms (fever, difficult breathing and cough) to the medical authorities immediately in order to contain the virus.

Addressing the Press Conference, Financial Commissioner Health & Medical Education, Atal Dulloo said that the Administrative Council of the Union Territory of J&K has decided to provide free of cost Universal Health Coverage to all the residents of Jammu & Kashmir in convergence with Ayushman Bharat-PMJAY. He added that around 15 lac additional families will be benefitted under the scheme apart from already covered 5.95 lac families.

Pertinent to mention, the scheme will provide an insurance cover of Rs.5 lakh per family annually without any restrictions on family size, age or gender. The scheme will cover all the pre-existing illnesses besides high end treatments of oncology, cardiology and nephrology. This scheme will also cover employees, pensioners and their family members.