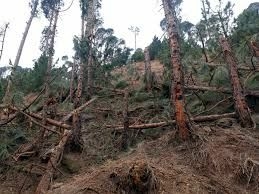 We, the people of India, must collectively thank NarendraModi, the chief campaigner of the BharatiyaJanata Party, for making it clear to us why NarendraModi, the prime minister of the country, ordered the air strikes on Balakot deep inside Pakistan in the last week of February.

The ostensible reason for the air strikes was to avenge the massacre that took place in Kashmir’s Pulwama on February 14, which left 40 uniformed personnel of the CRPF dead. The deaths were not a result of an encounter between security forces and militants that have long become routine in the Kashmir Valley. They happened when a lone Kashmiri youth, allegedly belonging to the Pakistan-based terrorist group Jaish-e-Mohammad, rammed his vehicle — laden with over 300 kilograms of explosives — into a CRPF convoy inching its way along the highway.

Less than two weeks later, we woke up to the news that Indian Air Force jets had struck the biggest training camp of the JeM in Balakot. The government officially claimed that “a very large number of JeM terrorists, trainers, senior commanders and groups of jihadis who were being trained for fidayeen action were eliminated.” The unofficial claims, conveyed to the media by “sources”, went further: 325 terrorists and 25 commanders had been killed in the strike. Pakistan had been taught a lesson it would not forget. The “New India” under the muscular leadership of NarendraModi would enter the country and take out the terrorists at will if they dared attack India again.

The rhetoric was so powerful and the hyper-nationalist cheering in the media so shrill that no one dared ask for evidence. But when one or two intrepid skeptics did wonder what exactly was achieved at Balakot, the ruling party and its army of supporters became menacing. Anyone who dared asked for proof was talking the language of Pakistan; was questioning the valour of the armed forces; was guilty of sedition and treason.

With the election campaign now under way, the Balakot strikes are becoming a central theme of the ruling party. Even though the Opposition has steered clear of national security issues and focused on jobs, farm distress and broken promises, the BJP is repeatedly bringing Balakot to the fore — and muddying the narrative even more.

Take, for instance, a recent interview given by the prime minister to an English TV channel. Asked whether he would eventually give proof that hundreds of terrorists had been killed in the strike, Modi retorted: “As far as proof is concerned, Pakistan itself has given proof. Why should they wake up at 5 a.m. and tweet? We were quiet. It is not as if the Indian government claimed the attacks first.”

That was a clever answer — but it was too clever by half. It is true that it was Pakistan’s director-general of the Inter-Services Public Relations, Major General Asif Ghafoor, who first tweeted that the Indian Air Force had “violated Line of Control”. But Pakistan also claimed that the Indian jets “released payloads in haste” and there were “no casualties or damage”.

By citing Pakistan’s tweet as proof of the success of the air strike, Modi has — embarrassingly for the country — brought attention to Pakistan’s version as a whole.
More embarrassing has been Pakistan’s subsequent response. If India wanted to teach Pakistan a lesson and left the country with a bloody nose, Islamabad’s response has been very curious indeed.

In a recent chat with foreign correspondents, Pakistan’s prime minister, Imran Khan, appeared to take the whole Balakot offensive much too lightly. According to The New York Times report on the chat, Imran Khan said that on learning that the Indian bombs had fallen into an empty ravine near Balakot, Pakistan opted for “a measured response and bombed an empty area just across the Indian border.” It went on to quote Imran Khan as saying: “They hit our trees; so we thought we’d hit their stones.”
Imran Khan went further — batting for the return of NarendraModi to power and seeing it as the best possible option of settling the Kashmir conflict. If Balakot was a slap on the face of Pakistan, it is baffling — to put it mildly — why the country’s prime minister should want another term for his hostile counterpart across the border.

But with each passing day that mystery is receding; with every BJP speech, it is becoming clearer that the Indian forces were made to strike Balakot not to teach Pakistan a lesson but to provide bragging rights to NarendraModi as a saviour of the nation and provide him a handy tool for his re-election bid.

If NarendraModi was indeed the supreme patriot that he claims to be and if he truly valued the courage and competence of our armed forces, he should have been the first person to reprimand the Uttar Pradesh chief minister, Yogi Adityanath, for referring to India’s professional army as “Modijikisena”. He did nothing of the kind — his silence serving as encouragement to other BJP leaders who repeated the epithet before the Election Commission, belatedly, stepped in.

In fact, he went further than his acolytes. In a speech that shocked retired and serving members of the defence services, NarendraModi asked first-time voters “to dedicate” their first vote to the “valiant soldiers who carried out the air strike in Pakistan’s Balakot” and to the “brave martyrs of Pulwama.” Never before has any Indian leader so brazenly sought to politicize the military for electoral gains.

Perhaps Modi was addressing his appeal to first-time voters because he is confident that the youth — subjected to the relentless propaganda of the last five years — have no knowledge of history and will be easily swayed by claims that Modi has achieved what no other Indian leader has in the past 70 years.

But not every Indian is a first-time voter. And even first time voters have parents and grandparents, teachers and tutors, people around them with longer memories. And many of them will still remember the grit and the glory of 1971 — the only time India decisively won a war. They will also recall that in complete contrast to the faux war-mongering of today, the prime minister of that time showed a grace and courage that was so much more powerful since it was entirely bereft of bombast.

Some BJP apologists, defending Modi’s electoral use of Balakot, erroneously claim that Indira Gandhi too capitalized on the 1971 victory to win by a landslide in the elections that year. The truth, though, is that India won the war after, not before, the elections.

Mrs Gandhi won her famous “GaribiHatao” election in March 1971, a couple of weeks before the Pakistan army went on a brutal rampage in what was then East Pakistan. In the following months, there was a massive influx of East Pakistanis into India. We may have been a lot poorer back then but unlike today we kept our borders — and our hearts — open to those fleeing genocide. More than 10 million refugees found shelter in India.

Indira Gandhi went across the world, campaigning against the suppression of democracy by West Pakistan in its eastern wing and the mass killings and rapes that followed. The American president, Richard Nixon, was famously hostile to her and blatantly backed Pakistan. But Mrs Gandhi combined diplomatic outreach with a quiet military preparation — executed by able military men untrammelled by considerations of electoral expediency — that eventually resulted in unequivocal victory. On December 16, 1971, less than two weeks after Pakistan bombed Indian air bases, its commander in Dhaka, Lieutenant-General A.A.K. Niazi, signed the instrument of surrender in Dhaka before Lieutenant-General J.S. Aurora of the Indian Army. No proof of India’s achievement was needed. No claims were made.

Two days later, Mrs Gandhi’s victory speech in the LokSabha was equally shorn of rhetoric. It lasted barely a minute. “All the world,” she said, “admires a deed well done. And I think, with all modesty, we can say that we have done this action well.” India’s most successful war prime minister went on to say: “But let us not forget that the road ahead is still long and very steep and we have many peaks to scale. Let us hope that we can do this with the same spirit in which we have faced this challenge. And that we will go ahead from peak to peak raising our nation to new heights of quality and of excellence…”

Watch that speech on YouTube. Even first-time voters will be able to tell the difference between the élan of true victory and its 56-inch, tawdry alternative…

Udta Kashmir: Heroin has taken over other narcotics in Valley