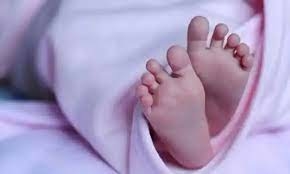 Moradabad : A pregnant woman who was travelling on the Shramjeevi Express with her husband, gave birth to a baby boy inside a toilet in the train.

Simpi, a resident of Bhagalpur in Bihar, was eight-months pregnant when she went into premature labour.

Her husband, Sooraj, raised an alarm and other female passengers helped the woman in her delivery.

A few Central Reserve Police Force (CRPF) personnel on the train assisted the couple and also provided them financial help.

When the train halted at Moradabad station, members of the Railway Protection Force (RPF) moved the woman to the district hospital.

The woman’s husband, who works at a private firm in Delhi, said: “Our doctor had earlier informed us that my wife would give birth sometime next month. So, we decided to go to our hometown during Chhath puja for better health care and spend time with family and relatives. But maybe, God wanted it to happen this way. I’m very thankful to both CRPF and RPF personnel and fellow passengers for their assistance.”

The baby and mother are both healthy, he said.