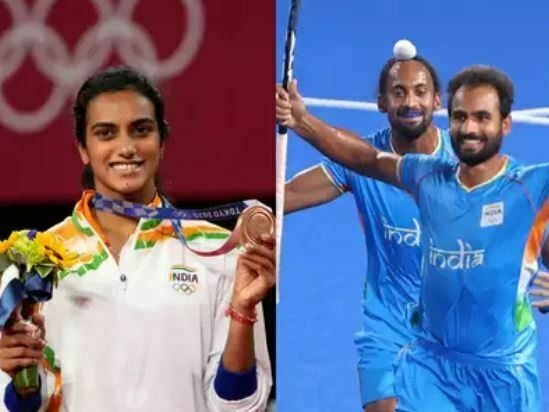 PV Sindhu smashed her way into history books with a second successive Olympic medal on Sunday, while the men’s hockey team raised hopes of resurrecting a glorious past by entering the semifinals for the first time in 49 years as India surpassed its performance at the 2016 Rio Games on an epoch-making day here.

Sindhu secured a bronze medal by beating world no.9 He Bing Jiao of China in the women’s singles third place play-off, becoming only the second Indian and the country’s first woman to win two Olympic medals. She had won a silver medal at the Rio Games.
With this, India’s medal count swelled to three. Weightlifter Mirabai Chanu (49kg) has already left after securing a silver, while boxer Lovlina Borgohain (69kg) is assured of at least a bronze after making the semi-finals to be held on August 4.
In Rio, the country had claimed just two medals.

“It makes me feel really happy because I’ve worked hard for so many years. I had a lot of emotions going through me – should I be happy that I won bronze or sad that I lost the opportunity to play in the final?” the 26-year-old badminton great said after the match.

While Sindhu’s bronze on the day was a reaffirmation of her being a legend of Indian sports, the hockey team’s march into the last four was an overwhelming emotional experience for not just the men who made it happen but also for the country which gave the world an icon called Major Dhyan Chand.

It was the end of a wait that has lasted 49 years. It last happened when American swimming legend Mark Spitz won seven gold medals and 11 Israeli athletes and coaches were murdered by Palestinian terrorists at the Olympic Village in the 1972 Munich Games.

Manpreet Singh and his men showed what resolve can do when they outplayed Great Britain 3-1 in the quarterfinal, at the end of which the determined men sobbed in jubilation, hugging each other tightly for they knew the enormity of this win.

They play world champions Belgium next and a win would mean a medal secured while a loss will still give them a shot at the bronze.

“It was believing. Everyone believing in themselves and that was the key today, everyone gave their 100 per cent today and they were dying and almost killed themselves on the field,” said Manpreet after perhaps the most important match of his career.

While Sindhu and the hockey team’s guts fetched them the desired results, it was not to be for boxer Satish Kumar, the first super heavyweight (+91kg) to qualify for the Olympics.

The 32-year-old entered the ring with 13 stitches on his face against reigning world champion Bakhodir Jalolov.

His cuts opened up but Satish didn’t back off and though he lost the bout unanimously, he earned the respect of his opponent and the fans.

“That’s the whole idea of being a sportsperson. You don’t give up, you never give up,” he said.

On the golf course, Anirban Lahiri ended his second Olympic campaign at Tied 42nd spot after carding a one-over 72 in the fourth and final round.
Lahiri, who began the week with a superb 67 and was inside Top-10, slid down the ladder thereafter with rounds of 72-68-72 over the next three days for a total of 5-under 283. He finished 57th in the 2016 Rio Olympics.

The other Indian in fray, Udayan Mane, who got into the field as a result of some withdrawals, also shot one-over 72 in the final round after earlier rounds of 76-69-70. He was 3-over for the week and ended 56th.

Indian equestrian Fouaad Mirza picked up 11.20 penalty points and was placed 22nd after the cross-country round.

A good round in the individual show jumping qualifier on Monday will ensure that Mirza, India’s only equestrian at the Olympics in over two decades, and his horse Seigneur Medicott, remain in the top 25 and make the eventing individual jumping final in the evening.

On Monday, the women’s hockey team will be in pursuit of history when it takes on Australia in the quarterfinals, while discus thrower Kamlpreet Kaur will compete in the women’s finals, hoping to replicate her brilliant qualification performance in the main event.

Also, Sanjeev Rajput and Aishwary Pratap Singh Tomar will look to round off what has been a forgettable campaign for the Indian shooting team on a positive note when they compete in the men’s 50m rifle 3 positions.