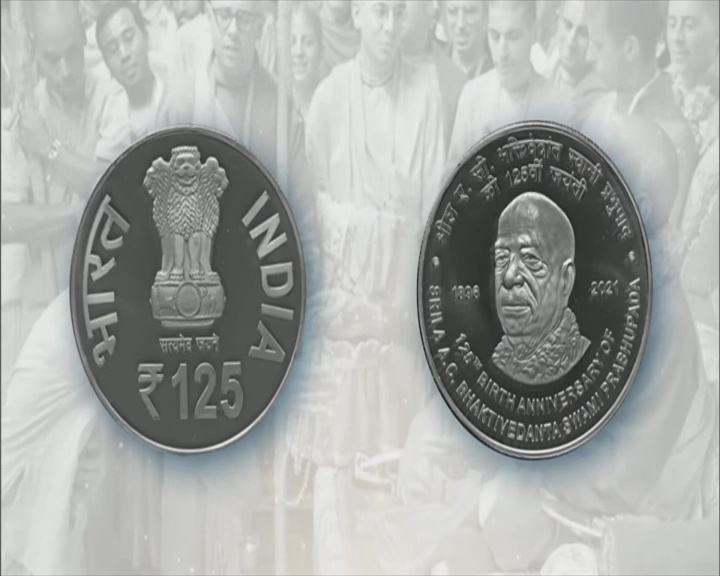 New Delhi: Prime Minister Narendra Modi on Wednesday released a special commemorative coin of Rs 125 to mark the 125th birth anniversary of the founder of the Hare Krishna movement, Srila Bhaktivedanta Swami Prabhupada, through a video conference. Union Culture Minister G Kishan Reddy was also present on the occasion. Swami Prabhupada founded the International Society for Krishna Consciousness (ISKCON) commonly known as the ‘Hare Krishna movement’.
ISKCON has translated Shrimad Bhagavad Geeta and other Vedic literature into 89 languages, playing a stellar role in the dissemination of Vedic literature across the world. Prabhupada also established over a hundred temples and wrote several books, teaching the path of Bhakti Yoga to the world, informed the release.

PM Narendra Modi said in Hindi, “Today we are celebrating 125th birth anniversary of Srila Prabhupada. It is as if the joy of meditation/devotion and contentment have come together. Millions of followers of Srila Prabhupada Swami and Krishna devotees are experiencing this feeling today all over the world.”

Modi while releasing the special commemorative coin also said, “Today there are hundreds of ISKCON temples in different countries around the world and is spreading the Indian culture. ISKCON has told the world that for India, faith means zeal, enthusiasm, to be in high spirits and faith in humanity.”

Recalling the role of ISKCON during natural disasters faced by the country, the Prime Minister said, “I remember when there was an earthquake in Kutch in 2001, how ISKCON had stepped forward to serve the people. Whenever the country experienced any calamity, whether it is the tragedy of Uttarakhand or the devastation of cyclones in Odisha and Bengal, ISKCON has worked as a support for the society.”

Swami Prabhupada or Srila Prabhupada, was born in Kolkata on September 1, 1896. Abhay Charan De was the name of his birth. He initially ran a pharmacy business before leaving India in 1959 to make people aware about the teaching of Krishna. He went to New York in 1965 and set up the first ISKCON centre, which now has temples and cultural centres across the globe.