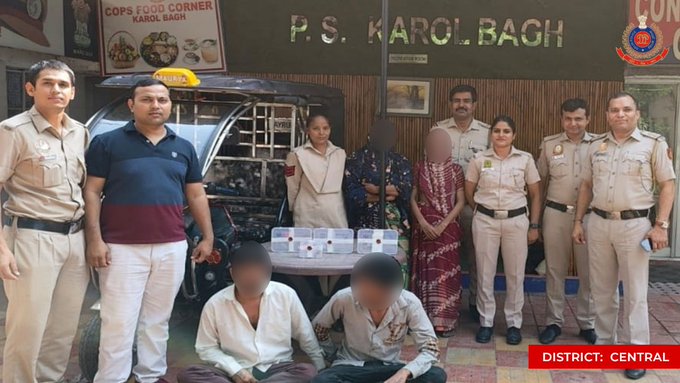 Delhi Police have arrested four members of a notorious family of thieves, known in their locality as ‘chor parivar’, for stealing jewellery worth Rs 1 crore, an official said on Sunday.

“After travelling some distance, the man sitting next to the driver changed his seat and sat next to the complainant in the back. In the meantime, one of the ladies opened the zip of the complainant’s bag and took three pairs of gold bangles from it,” the DCP said.

During the course of the investigation, the police questioned the other employees of the showroom to rule out the possibility of any internal involvement.

“The accused persons did not use any mobile phone during the entire incident which made it difficult for the police to trace them,” the official said.

However, while scanning CCTV footage, the police found that the e-rickshaw used in the crime had a designer sticker — ‘Maurya e-rickshaw’ — which helped the police established that the accused persons belonged to the Sultanpuri area.

“From local inquiry it was found that the family was famous in the area as ‘chor parivar’ as all the family members were involved in committing theft and other criminal activities,” Chauhan said.

The police then conducted a raid at their house, but the accused had fled before the cops could reach there. After this, policemen were deployed in the area in civil clothes to gather information.

“The stolen jewellery worth Rs 1 crore has been recovered from the accused persons,” the officer said.