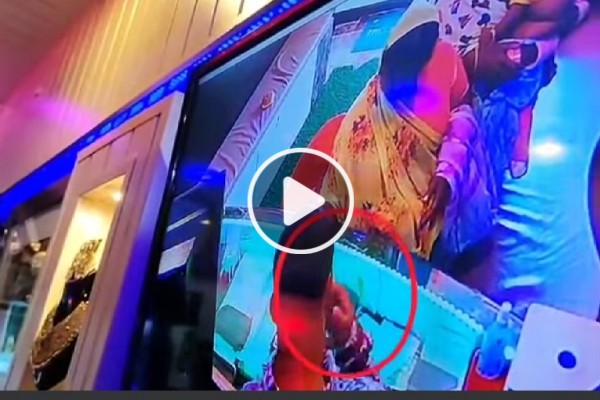 A woman, apparently a non-local, was caught on camera stealing gold ornaments at a jewellery shop in Srinagar city of Kashmir while pretending to be a customer.

The incident happened earlier this month in Bemina area. The CCTV footage of the entire incident was uploaded on social media and has gone viral since then.

In the video, the woman accompanied by another woman and a child, can be seen asking the jeweller about the ornaments.

While seeing the ornaments, the woman tricks the shopkeeper and manages to hide one of the earrings in a finger snap leaving everyone bewildered.

It was only after watching the CCTV that the shopkeeper came to know that the woman had stolen the earrings.

“We were not able to understand how they managed to steal. They have such a way of justifying that a person is not able to do anything. I request all of the people to be very cautious about such people,” says the shopkeeper who is explaining the entire incident in the video.

“I am a shopkeeper from Bemina. I request all of my jeweller brothers to not allow such people inside their shops,” he is heard saying in the video.

Sensing something was wrong, the man made the female thieves leave the shop but he did not know that they had already managed to swindle him.

The video was seen by nearly two lakh people with thousands sharing and commenting on it.

A user rightly pointed out the wrong sales skills: “Well, salesman skills need to be updated. It is a wrong practice to show more than one product at the same time. Any jewellery store outside India will show you one by one. They will never let you touch another product until 1st one gets back.”

Another user commented how the jeweller showed her the ornaments as “she was a beggar”.

Many others were astonished by the speed with which the woman was able to hide the earrings.

“She looks Brett Lee,” a user commented referring to the Aussie bowler who was known for his wild pace.