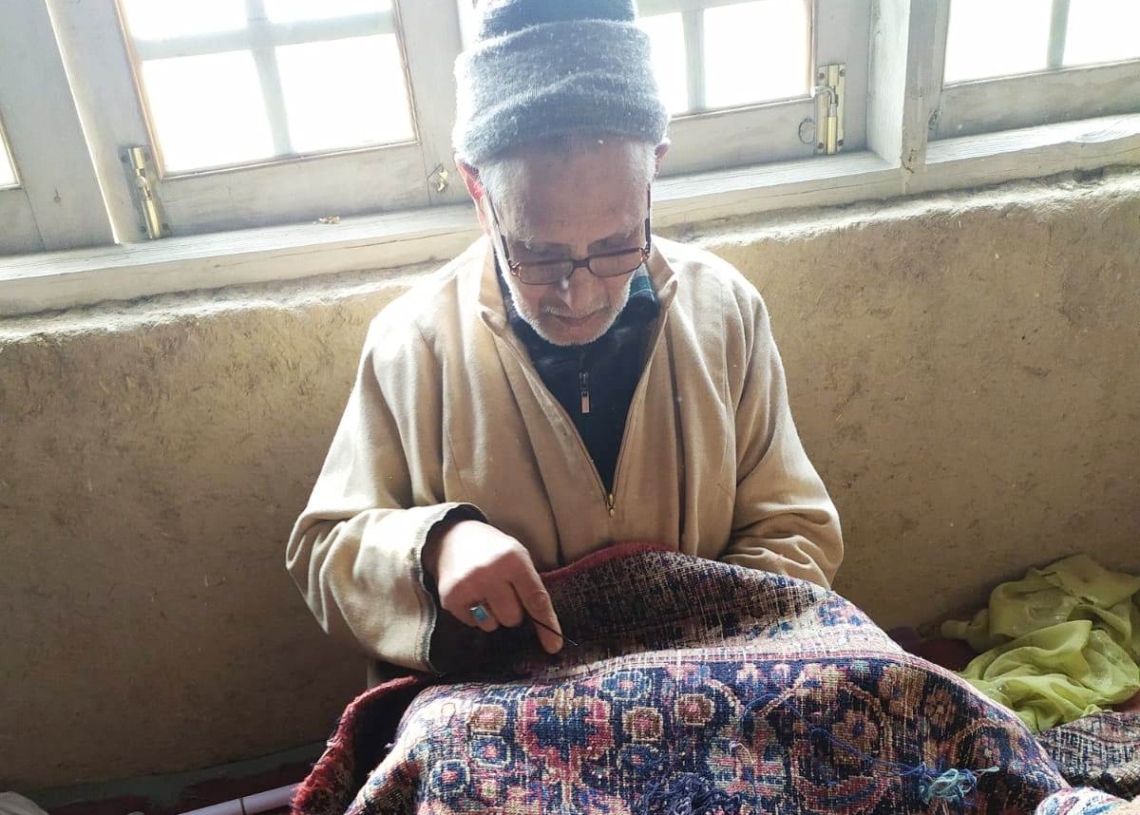 Srinagar: It took a group of three carpet darners six months to repair an antique woolen rug from the Iranian city Mashhad.

Imagine the cost of the rug! These rugs are priceless and can command a whopping price in the art market.

Unfortunately, the darners of these antique carpets are living a secluded life in the Zadibal area of the old city. They get paid peanuts for darning the costly rugs but continue to pursue the same profession for generations.

Darning a carpet can take up to a year

Artisan Abdul Hamid Dar said he had been doing ‘rafoogari’ for the past 55 years now.

“I have been doing ‘rafoogari’ right from my childhood….for the past 55 years. It took us six months to repair this woolen carpet from Mashhad. While three artisans darned this Mashhad carpet, sometimes it takes us a year to repair a rug. Some rugs we get are 150 years old. These rugs are priceless but we get meager wages for our work,” Dar told The Kashmir Monitor.

‘Darning as good as original’

Dar said it was not possible for anyone to tell that the carpet was darned and it looked as good as new after their repair work.

“Nobody will ever be able to tell that the carpet has been darned. When we darn a carpet, it looks like a new piece. Carpets are darned with a needle and a thread.

“Rafoogari’ involves matching the color and weave of the carpet so that a repaired patch merges with the rest. The thread is also colored to match the exact color of the carpet. It is a skill and everyone cannot do it. In fact, darning is more difficult than weaving a new rug,” he said.

Woolen rugs have ‘vanished’ from Kashmir

Well-known Kashmir businessman Manzoor Ahmad Wangnoo, who caters to high-end clientele across the globe, regretted that the woolen rugs had almost vanished from Kashmir.

“Unfortunately, woolen carpets have almost vanished from Kashmir. Some 30 years back, we used to get carpets and shawls from this area. Artisans from Zadibal had such a lovely collection. We should all now join hands to revive the forgotten arts,” Wangnoo told The Kashmir Monitor.

Incidentally, one can see artisans like Abdul Hamid Dar doing ‘rafoogari’ in the old city area of Zadibal during the ‘Srinagar Crafts Safari’ that has been started by the Handicrafts Department recently. The safari was started in the wake of Srinagar making it to the coveted list of the United Nations Educational, Scientific & Cultural Organisation (UNESCO) in Crafts and Folk Arts Category for the year 2021.

Director, Handicrafts and Handloom, Kashmir, Mahmood Ahmad Shah said they had started the Srinagar Craft Safari as part of efforts to give a boost to the handicrafts sector.

“We have started the Srinagar Craft Safari in different parts of old Srinagar city so that the people come to know about the rich handicraft products. Through the safari, people will also meet the artisans and see how different handicraft products are made,” Shah told The Kashmir Monitor.

This year, Srinagar’s application was forwarded to UNESCO on June 29 by the Government of India (GoI) and now this nomination is the global recognition to the rich craft legacy of Srinagar. Pertinently, the dossier for nomination for Srinagar as a creative city was first filed in 2019. However, only two cities – Hyderabad for Gastronomy and Mumbai for Film were chosen that year. Prior to 2019, only three Indian cities had been recognized as members of creative cities – Jaipur (Crafts and Folk Arts) in 2015, Varanasi (Creative city of Music) in 2015, and Chennai (Creative city of Music) in 2017.