Protest by pellet victims has exposed our collective failure: Rasheed 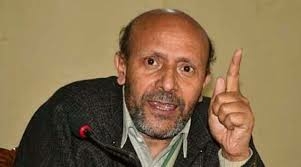 Srinagar, Feb 20: Reacting to protest by pellet victims seeking attention from the society for addressing their sufferings, AIP Supremo and MLA Langate Er. Rasheed has appealed masses to introspect and understand the message and the lesson from the protest.
In a statement issued today Er. Rasheed said that the protest by those blinded for a cause and victimized by state’s brutality is a slap on all of us as we have collectively failed all those who have sacrificed since 1989 and the situation has reached to a point, forcing worst victims of violence take to streets to remind us of our duties.
Er Rasheed said “Let every Kashmiri whosoever and whatsoever his status and stature may be understand that just emotions, tributes and traditional condolences and condemnations do fetch nothing unless we don’t discharge our duties with sincerity, commitment and dedication.
Each one of us has been on and often talking about sacrifices and no doubt these sacrifices are the most valuable assets Kashmiris have to present for pleading their case, but making pellet victims and other sufferers to take to roads should make our heads down in shame. The families of martyrs, victims of violence, half widows, a huge number of orphans and now the pellet victims have yet again shaken our conscience and shown us the mirror that we have miserably failed them all”.
Er. Rasheed appealed that without excuses let every individual, organization or amalgam cutting across political ideologies confess his failure and wakeup in light of the ground realities.
He said that either there should be some collective efforts to help these victims, who are the real hero’s or we should stop exploiting their sacrifices.
Er. Rasheed added that the protest by pellet victims has exposed our individual and collective failures and not only leaders but masses must also join heads and hands to rise to the occasion for the rehabilitation of victims.
He also lashed out at CM Mehbooba Mufti for misleading the world community and Kashmiris by engaging few Pellet victims but ignoring that their number is more than fifteen hundred.

Peace and stability is in everybody’s interest: IGP Kashmir