PM Modi thanks Kamala Harris for Covid help, invites her to India 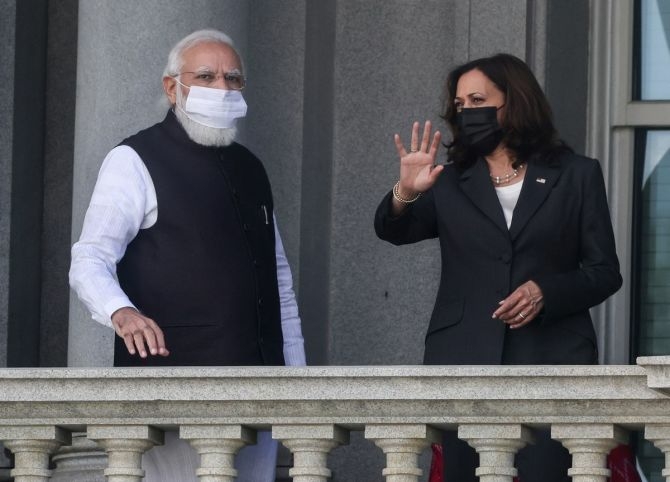 Washington : Prime Minister Narendra Modi said that United States Vice President Kamala Harris is a ‘source of inspiration’ for so many people around the world, as he expressed gratitude to her for being so warm and natural during their conversation when India was going through a devastating second wave of COVID-19.
Prime Minister Modi made comments during a joint press appearance with Harris at the White House.
‘Your being elected as the Vice President of America has been such an important and historic event. You are the source of inspiration for so many people around the world,’ Modi said.
Harris, 56, is the first-ever person of Indian origin to be elected as the vice-president of the United States.
‘I am so confident that Under President Joe Biden and your leadership, our bilateral relationship will touch new heights,’ he said.
The prime minister also extended an invitation to Harris to visit India.
‘Continuing on your journey of victory, Indians would also want you to continue that in India and wait for you to come to India and therefore, I extend to you an invitation to visit India,’ he said.
Recalling his conversation with Harris in June during the second wave of pandemic in India, he said, ‘A few months ago, we had an opportunity to talk to each other over the phone. We had a detailed discussion at that time and the way you spoke to me so warmly and naturally, I will always remember that.’
‘It was a very difficult time. India was confronted with the second wave of the pandemic but like a family, the sense of kinship and so warmly you extended a helping hand.
‘The words that you chose when you spoke to me, I will always remember that and I would like to thank you from the bottom of my heart,’ he said.
‘Like a true friend, you had given a message of cooperation and full of sensitivity and immediately we found that the US government, corporate sector and the Indian community all came together to help India,’ he said.
Harris was born to two immigrant parents — a Black father and an Indian mother.
Her father, Donald Harris, was from Jamaica, and her mother Shyamala Gopalan was a cancer researcher and civil rights activist from Chennai.