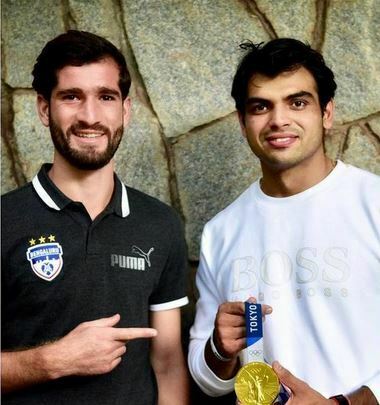 Srinagar: It can happen only on social that two famous personalities in the world of sports meet up and share some friendly moments with their fans.

“Please to meet our superstars Neeraj Chopra and P. R. Sreejesh,” wrote Danish while sharing a collage of the photos with Neeraj and Sreejesh.

While Neeraj has achieved the highest laurels in the field of track and sports by grabbing India’s first gold in the game, Danish too has taken a big leap professionally.

He was recently signed by Indian Super League Champions Bengaluru FC as a midfielder.

As for the track and field athlete, his javelin throw made history in the 2020 Olympic Tokyo.

Going by the club’s Twitter handle, Neeraj has recently paid a visit to the Bengaluru FC’s stadium in the city.