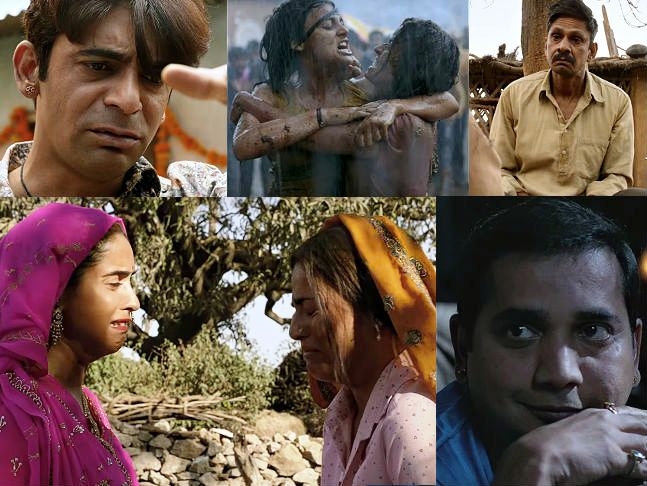 The makers of Pataakha released the trailer of their film on India’s 72nd Independence Day. Starring Dangal fame Sanya Malhotra and TV actor Radhika Madan, the over three minutes long promo is a whole new ball game.
Coming from the Vishal Bhardwaj camp, the trailer has left us excited to meet the two sisters Badki (Radhika Madan) and Chhutki (Sanya Malhotra) on the silver screen. They are referred to as India and Pakistan, born out of the same mother but each other’s biggest enemy. They start by calling each other names, beating each other and dragging the other in the mud. They grow up into bold, badass and beautiful women. Their fate is such that they end up marrying in the same family and you cannot help laughing at their predicament.
After Sanya and Radhika’s impressive acting, the next best thing in the trailer is the cracking dialogues and the way they are delivered by the stellar cast of the film including Sunil Grover and Vijay Raaz among others. The film has been written and directed by Vishal Bhardwaj who has delivered hits like Haider, Maqbool, Ishqiya, Kaminey and others.
The official synopsis of the film reads, “Pataakha is a comedy-drama about two sisters, Badki and Chhutki, who have grown up in a small village in Rajasthan. The constant war between the siblings has haunted their lives, right from learning to walk to searching for husbands. When they eventually meet their soulmates, they are relieved to know that they will finally be free of each other. But as fate would have it, it seems, that they can’t live with or without each other.”
Sharing the trailer actor Sunil Grover who looks promising in the film, has tweeted, “?? ?????? ??? ???? ?? ????????? ???? (we can choose relations but not relatives” The other members of the cast also promoted the film on their social media handles. Aamir Khan was all praise of his Dangal daughter as he tweeted to her, “Loved the trailer Sanya !!! Your first film after Dangal !! Good luck and all the very best! Love. a.”
Bankrolled by Kyta Productions, B4U Motion Pictures and Vishal Bhardwaj Films, Pataakha will hit the theaters on September 28 and will face a box office clash with Anushka Sharma and Varun Dhawan starrer Sui Dhaaga which releases on the same day.