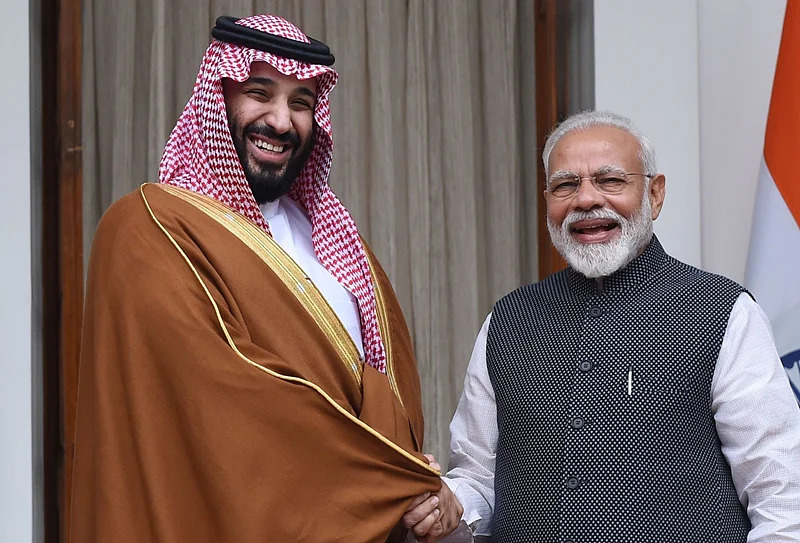 On the penultimate day of campaigning for the second phase of Assembly polls covering 93 seats on December 5, Modi addressed election rallies in Patan town of north Gujarat, Sojitra town in Anand district, Kankrej village of Banaskantha district, and Ahmedabad, where he also held a road show.

Addressing an election rally after leading a road show in Ahmedabad, he slammed the Congress and claimed the opposition party and its governments splurged taxpayers’ money on “family, relatives, and for their personal use”.

“After 2014, India has developed strong relations with Islamic nations. It is a matter of pride for me as well as for every Gujarati that nations like the United Arab Emirates (UAE), Saudi Arabia, and Bahrain have conferred their top awards on me. Yoga is now part of the official syllabus in Saudi Arabia,” said Modi.

Hindu temples are also coming up in Bahrain and Abu Dhabi, the prime minister told the gathering.

Unlike the Bharatiya Janata Party (BJP), which puts the nation first, the Congress has always given priority to just one family, said Modi.

According to the PM, the Indian economy ranked 6th in the world when the country got Independence in 1947 and went down to the 10th position by 2014 when the Congress was last in power at the Centre.

“After I assumed office and the BJP came to power in 2014, the economy rose from the 10th spot to the 5th position (in 2022) in eight years. The Congress could not do it because of dynastic politics, scams, and appeasement politics,” said Modi.

The Prime Minister said the Congress alleging tampering with Electronic Voting Machines (EVMS) is an indication it has already accepted defeat in the Gujarat Assembly elections.

“The way Congress has started blaming EVMs after yesterday’s voting in Kutch, Saurashtra, and south Gujarat (in the first phase of polling), it is evident the opposition party has conceded defeat and has accepted that the BJP will win the elections. Alleging EVM tampering is an indication the Congress is on its way out,” said Modi at an election rally in Patan town.

“The Congress knows only two things – abuse Modi ahead of polls to please the voters and then blame EVMs after voting,” said the BJP’s top campaigner.

He slammed past Congress governments for “widening” the rift between the rich and the poor in the country and “looting” the funds meant for the welfare of the deprived sections of society.

“A former Congress PM used to say that out of Re 1 sent by the Centre, only 15 paise reaches the poor,” Modi said, referring to the late Prime Minister Rajiv Gandhi’s famous quote from the 1980s.

“In those days, local bodies, state governments, and the Centre were ruled by the Congress. The BJP was not in the picture then. So which `palm’ was responsible for siphoning off 85 paise?” he stated in a dig at the Congress’s poll symbol.

Targeting the grand old party further, Modi alleged it only believed in ‘atkana, latkana aur bhatkana’ (stalling, delaying, and misleading), and said those who looted the poor in the country were now abusing him for putting an end to corruption.

Speaking at a rally in Kankrej village of Banaskantha district, he maintained the previous Congress governments never showed any interest in bringing the Narmada river water to the parched regions of Gujarat as the party was only interested in doing those works where there was scope for corruption.

The PM accused Congress of trying to stall the construction of the Sardar Sarovar Dam and supporting those who delayed the project through litigations, a veiled reference to Narmada Bachao Andolan (NBA) activist Medha Patkar.

“Can the people of Banaskantha forgive those who indulged in this sin of stopping water from coming here? The Congress was responsible for keeping Banaskantha thirsty. They must be punished. I hope you will not forget this during polling,” Modi said.

According to him, it was the BJP government that brought the Narmada river water to this parched region.

The PM said his government had pumped in nearly Rs 1 lakh crore to finish as many as 99 water supply schemes that were abandoned across the country during Congress rule.

“Food grains meant for the poor were diverted somewhere else. If you rob the poor, Modi will take action. And when such people are caught, they start abusing me,” he said.

Modi said the way people took part in voting on December 1 in the first phase covering 89 Assembly seats, he was confident of the BJP victory in Gujarat.

Before addressing the rally, the PM visited the Augarnath Temple in Kankrej and offered prayers.

Speaking at a campaign rally at Sojitra town, the Prime Minister accused the Congress of disowning Sardar Vallabhbhai Patel and said it absorbed a “slave mentality” after working with the British before Independence.

“The Congress has a problem not only with Sardar Patel but also with the unity of India, because their politics is based on the policy of divide and rule, while Patel believed in uniting everyone. Due to this stark difference, the Congress never considered Sardar Patel as their own,” the PM said.

“Congress people had worked with the British for several years (ahead of Independence). As a result, the party absorbed all the bad habits of the British, such as this policy of divide and rule and the slave mentality,” he added.

The Opposition party’s leaders avoid visiting the Statue of Unity, built in memory of Sardar Patel in the Narmada district, Modi alleged.

“Just because the statue has been built by Modi, Patel became untouchable for you? I am sure the people of Anand district will punish the Congress for insulting Sardar Patel,” the PM added.