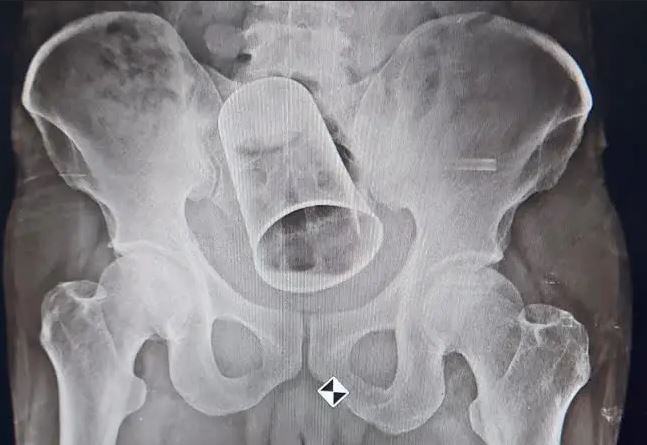 In a shocking incident, doctors at a government-run hospital in Odisha’s Ganjam district found that a man’s inability to defecate was due to a steel glass being shoved into his rectum by his friends, that too around 10 days before the man sought medical attention.

The doctors then removed the steel glass, around 8 cm in diameter and 15 cm long, through surgery. The glass, as per reports, was allegedly inserted in the anus of Krushna Chandra Rout around 10 days ago by friends in drunken condition after a booze party at Surat in Gujarat, where there is a liquor prohibition.

Rout experienced acute stomach pain, but he did not reveal it to anyone due to the stigma. Instead of undergoing treatment in Surat, where he was working at a textile mill, he preferred to return to his native place Balipadar in Buguda block, around 140 km southwest of Bhubaneswar.

The 45-year-old’s stomach started swelling and he could not defecate since the incident. Worried about his condition, his family members rushed him to MKCG Medical College and Hospital in Berhampur city last Friday.

During the consultation, Rout did not say that the glass was inside his rectum (sigmoid colon) until an X-ray revealed so, surgery department assistant professor Sanjit Nayak said.

“We formed a team of doctors to retrieve the glass by conducting a surgery on the same day as his condition was serious,” said Charan Panda, professor in the surgery department.

Initially, the surgeons tried to remove the glass through the anus. Later, they decided to conduct a laparotomy, an abdominal incision, by colostomy because of chances of infection due to a possible rapture in the anus, Panda said.

It took around 2.5 hours to remove the glass. The condition of the patient is good and he will remain for another four-five days under observation, the doctor said.

Tags: doctors remove glass from rectumfriends inserted glass in anusglass in anus of manodisha man glass in anussteel glass in rectum
No Result
View All Result