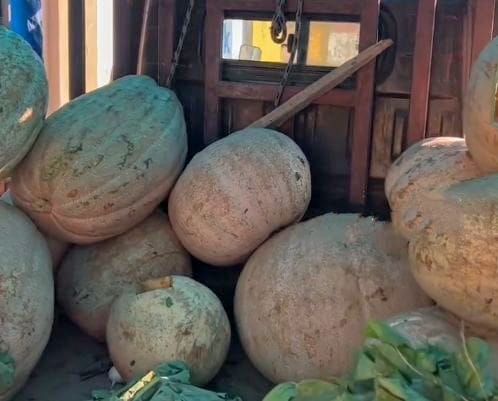 Srinagar: It is common to see people selling vegetables in vans nowadays but an elderly vendor Ghulam Mohammad is grabbing eyeballs for his giant pumpkins.

Usually seen dressed in colorful clothes, he sells the vegetables in a lorry that can mostly be seen close to the uptown Sanatnagar area. Though he sells other vegetables as well, he is especially known for his big pumpkins with some weighing around 20 kilograms.

“This year we had a good season and some of the pumpkins weighed 20 kg. I have sold most of the pumpkins as people love making doud-e-alle in Kashmir. Eating pumpkin is also a sunnah and it has immense health benefits,” said Ghulam Mohammad, who hails from the Budgam district.

He said he also sold the pumpkin ‘in slices’ as some of these were too big.

“I also sold pumpkins in slices as the sizes were too big in some cases. One family cannot eat an entire pumpkin especially when it is 15 to 20 kilos. And that is why there is a tradition in Kashmir to distribute slices of pumpkin among friends and relatives. Pumpkins are mostly sold in October and November months and it is not an all-season food. Later, its seeds are dried and also have medicinal value,” he said.

Popular food blogger of ‘Kashmirfoodgram’ fame, Omar Rather said Ghulam Mohammad’s vegetable lorry stood out from others because of his larger-than-usual pumpkins.

“He stands out from others because of his giant pumpkins. Pumpkins are big generally but the ones sold by him are huge. I was surprised to see that one of his pumpkins weighed 20 kg and he has become very popular because of this. He also wears colorful clothes and his mannerism too has made him very popular, not just locally but also on social media,” said Omar.

“When I vlogged about his pumpkins, I got inquiries from bloggers outside the Valley and they too are keen to feature him on their social media handles. And we should promote people like Ghulam Mohammad. Despite being elderly, he works hard for a living and has set a precedent for the younger generation.”