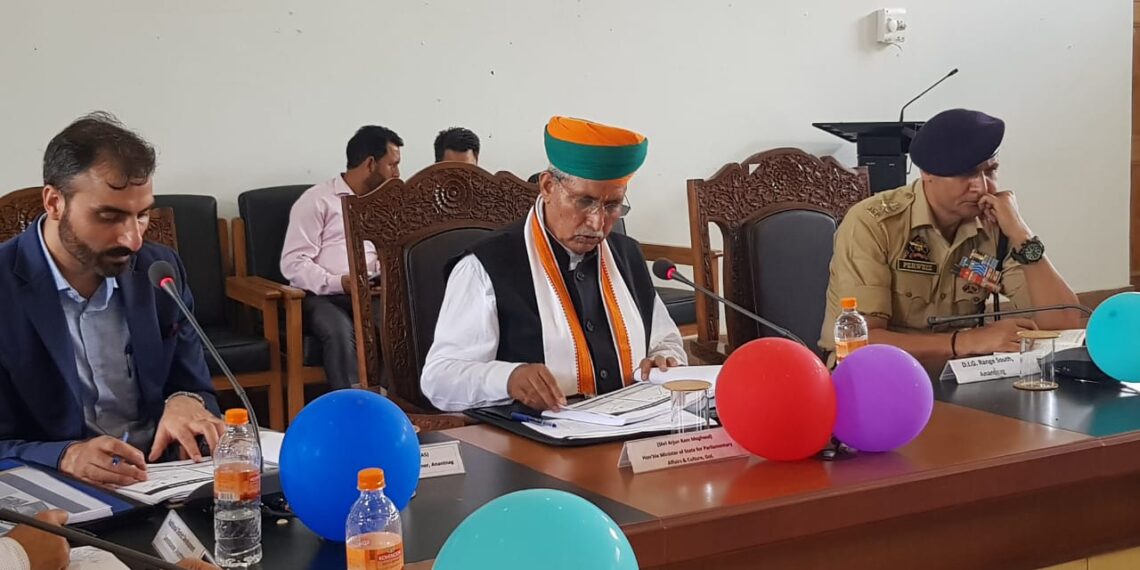 Arjun Ram Meghwal said that the initiative of Direct Benefit Transfer (DBT) of PM Narendra Modi-led government has been a game changer that has filled the biggest gap in the implementation of the Central Government schemes and curbed corruption to a larger extent.

The Minister was reviewing the detailed implementation of Central Government Schemes at Anantnag.

The Minister enquired about the status of the implementation of schemes like PM SVANidhi, PMAY Rural & Urban, MGNREGA, PMKisan, Ayushman Bharat (PMJAY/Sehat), etc.

Under PM SVANidhi, he stressed on the coverage of maximum vendors and timely disbursement of tranches to them. The Minister also emphasized coverage of farmers under KCC and stressed that the awareness of KCC among the fish farmers must also be done so that they will be able to avail credit under KCC from various available banks in the district for the development of their fish farms.

The Minister also asked the district administration to explore the best tourist destinations in the district which can be developed on modern lines. He also said that there are various archeological sites in Kashmir like the Avantiswami temple in Awantipora which has a great potential to become among the world heritage sites having rich architecture.

The Minister also asked the district administration to explore different facilities that can be made en route to Shri Amarnathji cave to make next year’s Amarnathji Yatra hassle-free for Yatris.

Meghwal also appreciated the efforts of district administration Anantnag which has hoisted 1.5 lakh flags under the ‘Har Ghar Tiranga’ campaign.

He said that IEC activities are regularly being held in the district to achieve citizen awareness and engagement for better implementation of schemes. He said that social audits are being held regularly to ensure accountability and transparency in public expenditure.

Earlier in the day, the Minister also held a review meeting at the Archaeological Survey of India office in Srinagar and took stock of the various conservation and renovation projects being run in Srinagar and other districts. He also visited the Awantiswami temple at Awantipora during his visit.