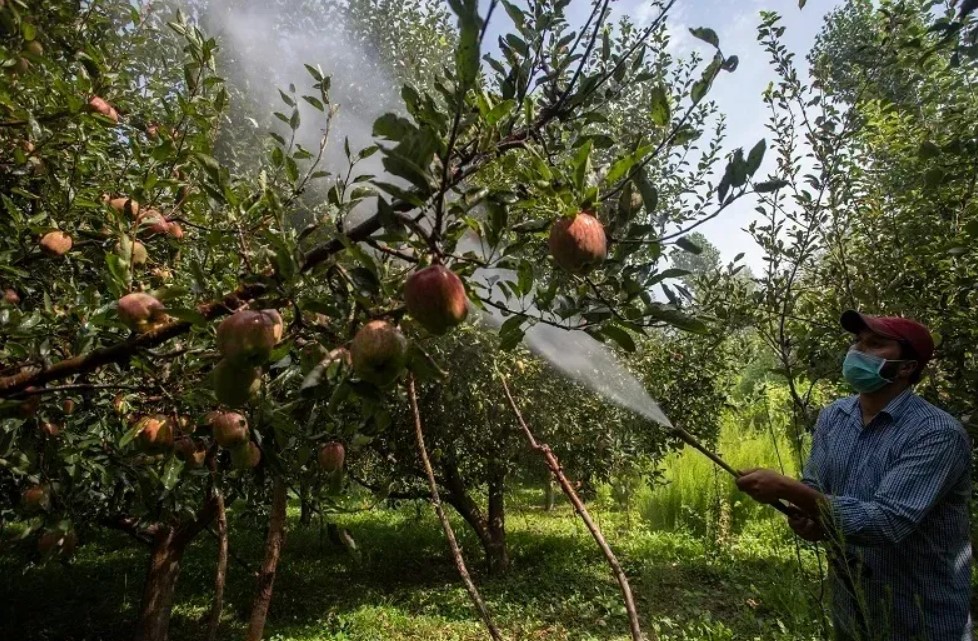 Srinagar:  Jammu and Kashmir government has launched a pilot project to reduce the use of harmful pesticides in the agriculture and horticulture sectors.

This is one of the 29 projects approved by Jammu and Kashmir administration after being recommended by the Apex Committee for holistic development of agriculture and allied sectors.

The use of pesticides is rampant in Jammu and Kashmir, particularly in the horticulture sector, which is the mainstay of the valley’s economy.

As per figures, pesticides make up over 55 percent of production costs in the horticulture sector. The use of chemicals is equally in higher proportion in paddy and wheat crops. Most of the pesticides, fungicides, and fertilizers are imported to Kashmir from different states. Farmers said hundreds of crores are spent on pesticides every year in Kashmir.  Indian pesticides market reached a value of around Rs 212 billion in 2021. It is expected to reach Rs 320 billion by 2027,

At a budget of Rs 27 crore, the Jammu and Kashmir administration is now implementing the project to minimize pesticide use, increase product suitability towards export and organic standards and reduce the high input costs.

An official document accessed by The Kashmir Monitor revealed that the Agriculture Production department will develop cluster-based model orchards, in which the use of pesticides will be restricted.

“10 Cluster model high-density plant orchards will be set up in which minimum use of pesticides will be done. Disease-resistant varieties of crops will be identified and planted in these orchards. It will be followed by developing, validating and demonstrating efficient decision support system on pesticide use,” it said.

The document said the department will focus on popularizing and adopting advanced spraying technologies and bio-pesticides.

“20 Custom hiring centers will be set up for advanced spraying machines. 100 Agri-entrepreneurs will be trained in bio-pesticide production,” it said.

As per the document, nearly 1500 jobs will be created through the project. Nearly 100 new enterprises will foray into this field in the next five years.

Dr. Tariq Rasool, Associate professor of pathology, SKUAST, and Dr. Malik Mukhtar have been roped in to implement the project.

“If we talk about apples, on average orchardists spray 20-30 kilograms of pesticides on a hectare of apple orchard. We want to bring down its use to mere 2-3 kilograms. In Kashmir, pesticides comprise 55 percent of production cost, which is not the case in Europe, where apples are grown in good quantity,” Dr. Tariiq said.

Under this project, the scientists will demonstrate the ways through which the use of pesticides can be reduced.

“Our spraying technology is outdated. Our vision is to introduce smart farming. Under this project, our growers will learn about smart farming and reliance on bio-fertilizers. The growers will be informed about which spray is required and when the entire spraying process has to stop. The growers should know about the concept of Maximum Residual Level (MRL), which is usually considered by people in European countries while buying fruits,” he said.