At least 20 killed, 300 injured in 5.9 magnitude quake in Balochistan 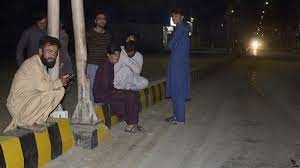 The Provincial Disaster Management Authority in Pakistan’s Balochistan province said on Thursday that at least 20 people had been killed and over 300 injured in a magnitude 5.9 earthquake in the area.

Pakistan’s Dawn news reported the earthquake was centred near Harnai district at a depth of 15km, while tremors were “felt in Quetta, Sibbi, Pishin, Muslim Bagh, Ziarat, Qila Abdullah, Sanjavi, Zhob and Chaman”.

The earliest tremors were felt at 3:20am (local time) on Thursday, after which panicked citizens rushed out of their houses reciting verses from the holy Quran.

Deputy Commissioner of Harnai district Sohail Anwar Hashmi told Dawn that of the fatalities, six were children. An official told Associated Press four of the dead were people working in a coal mine. “Most of the population in the area live in sun-baked mud houses, many of which collapsed,” Associated Press reported.

Hashmi was quoted by Geo News as saying, “several buildings in Harnai have been damaged while many people have been left buried under the rubble. He said some government structures also were destructed. The power supply to the area has been suspended”.

“Emergency was also enforced in Quetta hospitals as the injured are being shifted to hospitals in Quetta,” Geo News reported. There are fears the death toll could rise.