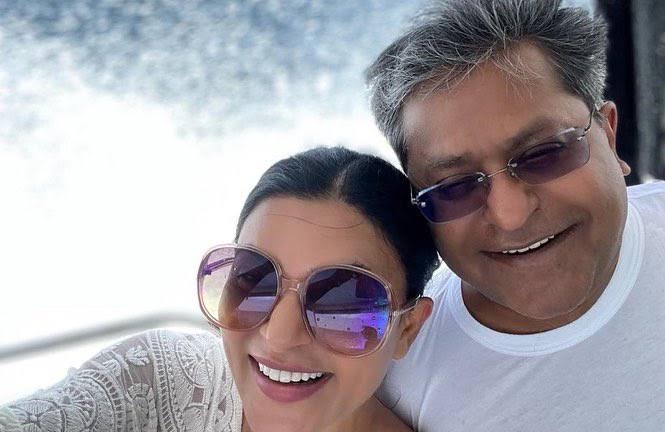 Speculations are rife that Sushmita Sen and Lalit Modi have called it quits.

“It was just a few months ago that Sushmita Sen hit headlines for her alleged affair with Lalit Modi. He had taken to his Twitter handle to share some mushy pictures with the diva and address her as ‘My love’. He added even added it to his Instagram bio. But once again they are in the news because of the same Instagram bio. He has now removed Sushmita Sen from it and the speculations are being made that the couple has parted ways,” Bollywood life.com wrote.

The portal however hastened to add that there is no confirmation on it yet. “ but if it is true then their affair was pretty short-lived,” it said.

Sushmita Sen was recently spotted with her ex-Kashmiri beau Rohman Shawl in Mumbai.

Sen was filmed outside a home decor boutique with Rohman and her elder daughter Renee Sen.

Earlier, Lalit Modi Modi posted cryptic pictures and announced that he was dating Sushmita Sen. “Just back in London after a whirling global tour #maldives # sardinia with the families – not to mention my # better-looking partner @sushmitasen47 – a new beginning a new life finally. Over the moon. Love does not mean marriage YET. BUT ONE THAT BY GOD’S GRACE WILL HAPPEN. I JUST ANNOUNCED THAT WE ARE TOGETHER,” he said.

Sushmita’s post has finally put the lid on rumors that the couple was not on good terms for some time. “I love you guys,” was the parting shot of Aarya star

She made her Bollywood debut in the 1996 film Dastak. She has featured in films such as Biwi No 1',Do Knot Disturb’, Main Hoon Na',Maine Pyaar Kyun Kiya’, Tumko Na Bhool Paayenge’ and `No Problem’. Her eldest daughter, Renee, made her acting debut with a short film this year.