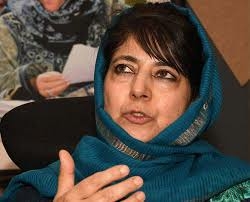 Srinagar, Apr 14: People’s Democratic Party (PDP) president and former chief minister Mehbooba Mufti on Sunday termed PDP’s self-rule formula the most pragmatic approach to resolve the decades old Kashmir conflict and reiterated that peace will remain elusive in the state unless peoples’ aspirations aren’t taken into account by both India and Pakistan.

Addressing worker’s convention in South Kashmir’s Kulgam, Mehbooba said that the world has now realised how Kashmir issue, if allowed to remain unsettled, could become a major cause for pushingboth India and Pakistan towards brink of a nuclear war. She said that it is high time that both the countries for their greater common good address Kashmir issue on priority and to begin with, PDP’s Self Rule formula is the best option as already described by the saner voices of South Asia.

“It was Mufti Mohammad Sayeed who made confidence building measures and engagement both internally and externally the most inseparable features of Kashmir and made people at the helm in New Delhi and Islamabad realize that Jammu and Kashmir could be opened up to the rest of the world through all our traditional routes to China, central Asia and other geographies. We have been demanding that the two fragmented parts of Kashmir must be made into a single unit without changing borders and free trade, free movement of people, students and professionals, joint initiatives in tourism and education is initiated,” Mehbooba said.

The former chief minister said that the day coalition government in the state fell in June last year, she had cautioned against the adoption of muscular approach for Kashmir will turn the situation more gruesome and worrying. However, according to the PDP President, it seems that there is only muscular policy and no other policy that has been adopted for the people of Kashmir.

She added that peace state’s permanent feature, announcement of mega development projects and opening up the doors of coffers will not help in any way as these policies have failed to yield the desired results and they will fail in the future also.“We have to learn from what is happening around the world including Afghanistan where there is a thrust on dialogue and Pakistan has been counted as a major stake holder. Talks is the only way forward and it is only through non-confrontational approach that we will be able to give our coming generations a safer and tranquil place to live. Making peace of graveyard prevalent and never worked and will never work,” said Mehbooba.