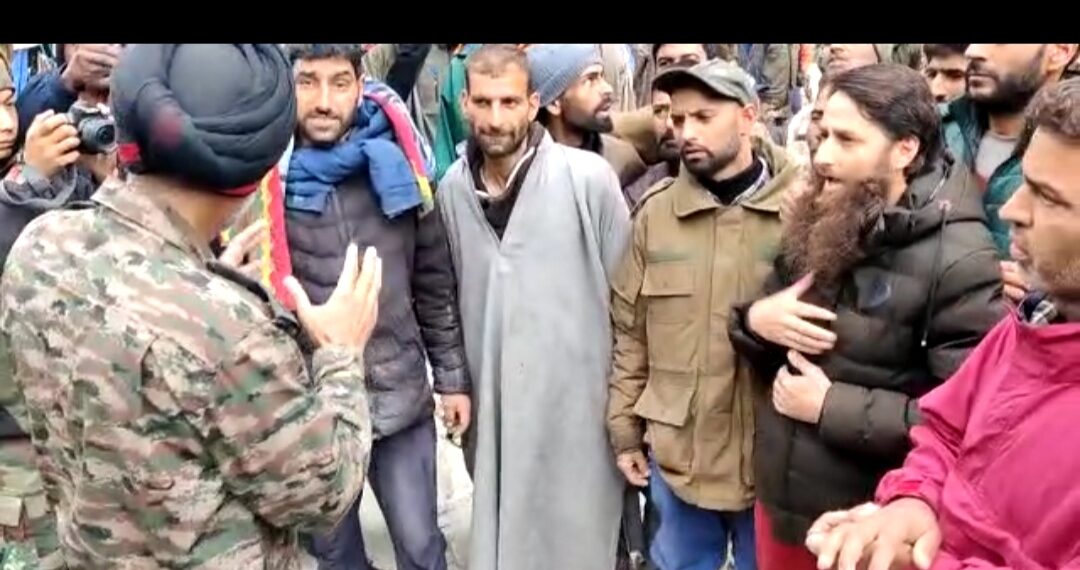 Srinagar: A video of Muslim service providers urging a top army commander to save pilgrims and not bother about their losses is melting hearts.

In the video, Muslim service providers could be seen talking to General Officer Commanding 15 Corps Lieutenant General ADS Aujla at Baltal in Sonamarg.

“We are sad about the loss of lives. We are not worried about our financial losses. We are pained because people have died,” a man can be heard telling Lt Gen Aujla.

Tragedy befell Amarnath Yatra when a cloudburst triggered flashfloods at Kali Mata near Y Junction of the holy cave shrine on Friday evening. At least 25 tents were washed away. More than 15 bodies have been recovered from the cloudburst site. Around 63 injured Yatris have been rescued.

NDRF, army, police, CRPF, ITBP, SDRF, and other agencies are involved in the search operation. Rescuers are using the latest gadgetry to locate the missing persons. Sniffer dogs have also been pressed into service to help in the rescue operations

“Indian Army is relentlessly carrying out rescue ops for injured AmarnathYatris in the cloud burst at Baltal yesterday. The rescue team immediately rushed to the site on getting information about the casualties. An Infantry Battalion led by a Colonel along with Quick Reaction Teams, an additional company worth of personnel from Sector RR, and a team from Special Forces reached Holy Cave along with specialized rescue equipment to undertake the Rescue Ops. Throughout the night, Commander Sect RR & CO Infantry Battalion oversaw and coordinated rescue ops from the Holy Cave and Nilgrar. Medical resources at Holy cave and Nilgrar were activated and additional resources deployed,” said a defense spokesman at Srinagar.

He said nine Surveillance Detachments with HHTI, NVDs, and other ni sights were also deployed for search ops. Hand-Held Thermal Imagers, Night Vision Devices, and other night sights were used for the search. Two ALH helicopters were moved for Casualty Evacuation at Holy Cave, however, owing to bad weather situation night landing at Cave was unsuccessful. Two Through Wall Radars and two Search And Rescue dog squads were also moved to Holy Cave for rescue ops.

“The search, rescue, and medical effort continued at daybreak. At 06.45 AM the first ALH landed at the site to commence evacuation of the injured. A total of 15 fatal and 63 injured Yatris have been rescued. Both Army and Civilian helicopters are carrying out relentless sorties to evacuate the injured and the dead. Injured Yatris’ medical treatment is ongoing. A total of 28 patients have been evacuated from Holy Cave to Advanced Dressing Station Nilagrar. After stabilizing, 11 have further been moved to SKIMS Srinagar in civil helicopters for treatment. 15 dead bodies have been moved from Holy Cave to Nilagrar. Stranded Yatris are being escorted by Indian Army personnel till Baltal since the track is slushy and slippery,” he said.

Simultaneously search was also commenced at daybreak at Amarnath Nar at Sangam for any possible casualties. Lt Gen ADS Aujla, GOC Chinar Corps, and Maj Gen Sanjiv Singh Slaria, GOC Kilo Force visited the Holy Cave early in the morning to review the rescue and medical efforts being undertaken by the Indian Army. The GOC Chinar Corps also interacted with the Yatris and locals and assured them of all possible help from the Indian Army.