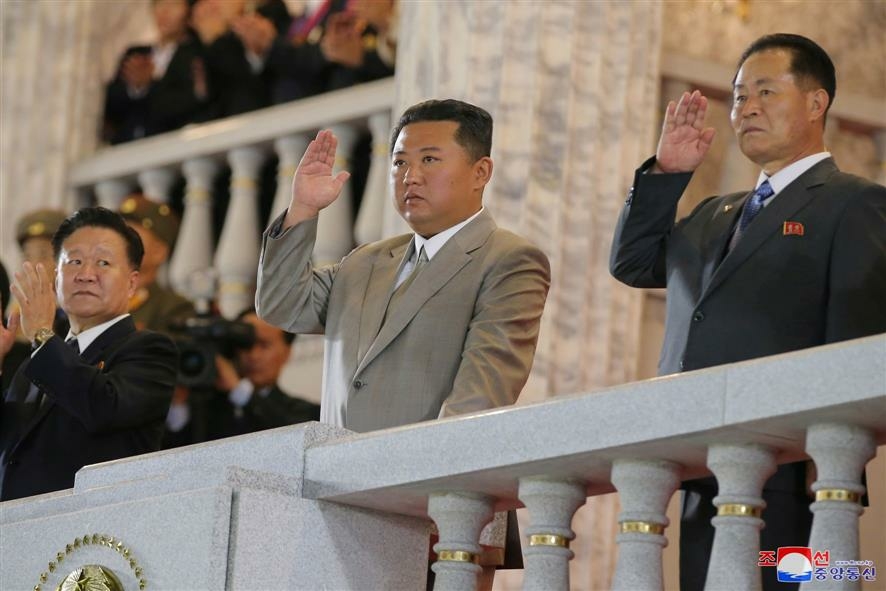 Though there were no major new weapons on display at North Korea’s first military parade since US President Joe Biden took office, that was broadcast on Thursday, there was a lot of attention on the new-look of North Korean leader Kim Jong Un, who has undergone a noticeable weight loss over the past months.

Whatever he is doing to get this thin frame, he looks a lot better than what he did a few months ago. The 37-year-old leader returned to the public eye after being absent for most of May, which had raised questions about his health.

At the parade, Kim also appeared to pay homage to his grandfather with a haircut similar to one sported by Kim Il Sung about 70 years ago.

The North Korean leader may have dropped at least 20 kilograms (44 pounds) over the past several months, according to a South Korean lawmaker briefed by a spy agency official in July.

He wore a tan-coloured suit, waved, smiled and gave a thumbs-up as thousands of paramilitary forces marched for more than an hour in Pyongyang.

Kim, who had been overweight and a chain-smoker, has been the subject of health speculation for years and his public appearances are closely tracked for insights about the autocratic and secretive regime in Pyongyang, especially since his family has a history of heart disease.

Kim’s weight loss had first become noticeable in June, when he made his first public appearance in weeks to convene a ruling party meeting. Some North Korea watchers then said that Kim, who is about 170 cm (5 feet, 8 inches) tall and has previously weighed 140 kilograms (308 pounds), may have lost 10-20 kilograms (22-44 pounds). Experts told AP that Kim’s weight loss is more likely a result of efforts to improve his shape than an indicator of health problems, considering his regular public activity.

But why does the rest of the world care about his health? Kim’s health matters in Seoul, Washington, Tokyo and other world capitals because he hasn’t publicly anointed a successor who would control an advancing nuclear programme targeting the United States and its allies—if he is incapacitated. North Korea, never open about the internal workings of its leadership, has over the last year shut itself up even tighter to protect against the coronavirus pandemic.