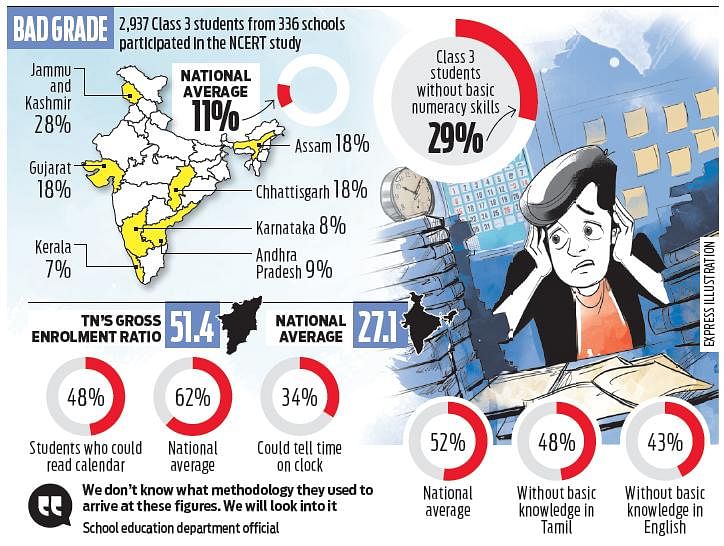 Srinagar: A latest NCERT study has revealed that Jammu and Kashmir has the second highest percentage of Class III students who lack basic numeracy skills.

NCERT’s Foundational Learning Study 2022 has revealed that 28% of Jammu and Kashmir’s  Class III students could not complete most basic grade-level tasks, which include parameters like number identification and discrimination, division, multiplication, fractions, identifying patterns comprising numbers and shapes, identifying dates and months in the calendar.

The states with the lowest percentage include Kerala (7%), Karnataka (8%), and Andhra Pradesh (9%).

The findings have been released at a time when Jammu and Kashmir’s Gross Enrolment Ratio (GER) in higher secondary and secondary levels has increased by over 7 percent and 1 percent respectively.

The study revealed that only 49% of students could identify dates, months, and days on the calendar. While it is 62 percent at the national average.

Against a national average of 52 percent, it revealed that only 44% of students of grade III could tell time correctly on the clock.

While 31 percent of Jammu and Kashmir’s students could identify timing in the clock after hints, 26 percent fail to respond.

The study said that 38 percent of Class III students couldn’t calculate the measurement and length of the object.

Similarly, only 45 percent of students identify and complete patterns with shapes and numbers.

The study said that 51 percent of the students of ClassIII were aged between 7-8 years. It revealed that 33 percent belonged to Below Poverty Line and 77 percent attended pre-primary school/ Anganwadi center.

In addition to the curriculum, Jammu and Kashmir students are also lagging behind in co-curricular activities.  Seventy-two percent read books other than syllabus compared to the national average of  82 percent.

Eighty-nine percent as per the survey participate in art and crafts compared to a national average of 91 percent. To improve the performance of students an official said the administration has already embarked on a mission to raise the standards of education by including modern innovative methods of teaching.