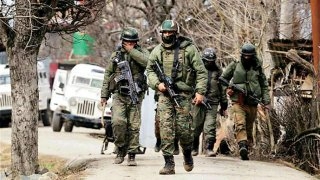 Srinagar, Mar 13: A militant was killed in a brief shootout with security forces at Rafiabad in Sopore area of north Kashmir Baramulla district on Friday afternoon.
A police officer said that a joint team of 32 RR and SOG intercepted the militants at naka laid following specific information at Shutlo village of Rafiabad.
After being intercepted, he said, militant opened fire which was retaliated, triggering of a gunfight. in the exchange of gunfight, one militant was killed,he said, adding that one AK-56 along with 3 magazines, 70 rounds and two grenades were recovered from the site.
Addressing a press conference, Deputy Inspector General (DIG) of Police North Kashmir, Mohammad Suleman Choudhary (IPS) identified the slain militant as Mudasir Ahmad Bhat son of Sonullaha Bhat of Shutloo and according to police he had joined militant ranks only a week ago. The slain was affiliated with Lashkar-e-Toiba (LeT) outfit, the officer said.
DIG said that the forces also recovered steel bullets from the encounter site and the same bullets were also used by the attackers at Warpora last week. SPO, a civilian were killed while as a cop suffered injuries after militants attacked them at Warpora, Sopore on March 04. DIG also appealed the other missing youth who apparently had joined militant ranks to return to their homes.
Bhat, according to reports was a Hafizi Quran and used to lead prayers at a mosque in Sopore before going missing last week along with four other youths from Baramulla district.
Meanwhile, police sources said that the body of the slain will be handed over to family after conducting all the necessary legal medico formalities.