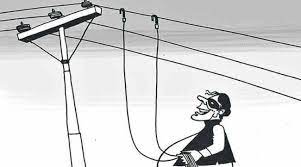 From midnight inspections to the recovery of crude heating gadgets, KPDCL has deputed teams across the valley to reduce the soaring energy demand in winter.

Chief Engineer, KPDCL, Javed Yousuf Dar told The Kashmir Monitor that they have deputed teams across the valley to act against the violators.

“Our field teams are on the job to check illegal power usage. Our officials conduct surprise midnight inspections in metered areas and recover the wire that is used by the consumers for illegal hooking. Similarly in non-metered areas, crude heating gadgets are ceased by our officials during the raids,” he said.

Dar said the power demand has increased by 60 percent compared to September.

“We are witnessing power overload and that is the reason that a curtailment schedule has been announced. A registered consumer is using more electricity than the agreed load. If people use electricity judiciously during the peak time –morning and evening– power situation will improve,” he said.

To check electricity pilferage, the department has roped in the police department to implement the government directions.

As per the officials, electricity demand is expected to reach 2000 Megawatts. Last year power demand during winter was recorded1750 Megawatts.