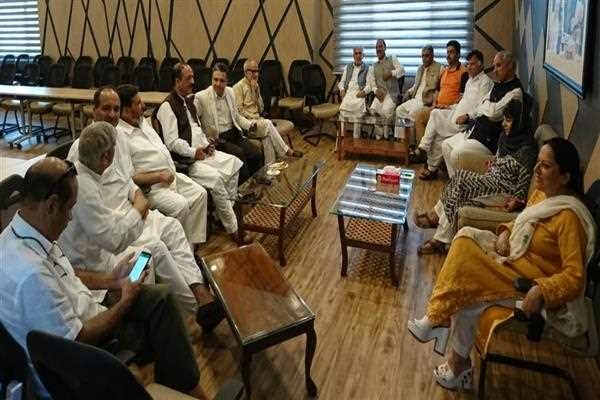 Srinagar, Aug 15: People’s Democratic Party (PDP) President Mehbooba Mufti on Wednesday held a detailed meet with her party ’s top leadership over the present political situation and measures needed to be taken to defend Article 35-A at country’s top court.

In a statement, PDP chief spokesman Rafi Ahmad Mir said PDP President and former Chief Minister Mehbooba Mufti presided over the meeting that was held at her Srinagar residence and was attended by the party’s top leadership.

The meeting, as per the spokesman, discussed in detail the current political situation in the state and the need to safeguard Article 35-A at present. It was unanimously agreed during the meeting that the special position accorded to the state of Jammu and Kashmir by the constitution of India needs to be protected on all fronts and that the party will remain in the forefront to defend it in country’s Supreme Court.

The meeting also highlighted how the PDP while being part of the coalition took drastic and vital measures for the defence of the Article 35-A and the government had engaged the top lawyers of the country for the purpose. PDP President during the meeting emphasized that the fight to safeguard Jammu and Kashmir’s special status will be carried forward with the same zest.

According to PDP chief spokesman, party’s veteran leader and parliament member Muzaffar Hussain Beigh along with party’s legal counsel will fight the assault being launched against the state’s special position in Supreme Court of India and will remain present in the court on next hearing slated to be held on August 27.

Beigh, decided the meeting, will on party’s behalf utilise his legal expertise to the fullest to defend 35-A in the court and besides that, the party leadership in unison shall remain in the frontline to ensure that the state’s unique position and status isn’t fiddled with at any cost.