‘Lagaya nahi kabhi’: Kashmir man wears seat belt in neck, says he has been driving for 10 to 12 years, video viral 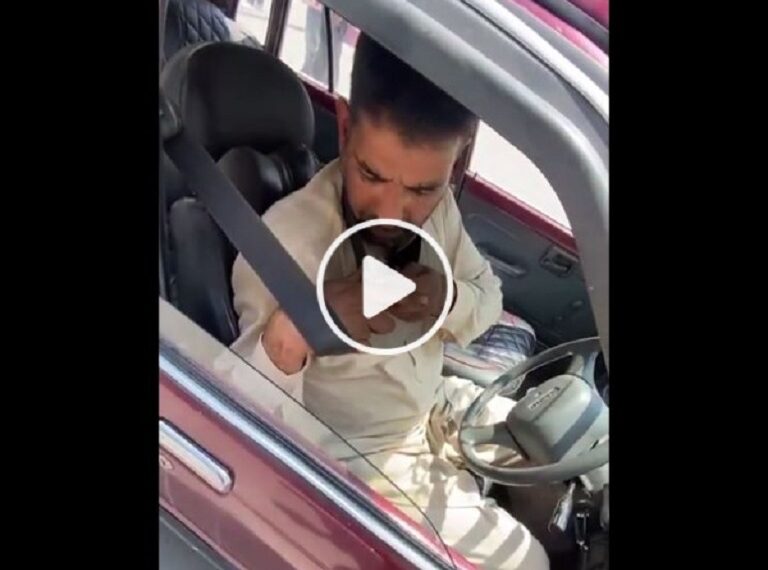 Kashmir man seat belt viral video: Thousands die in Kashmir road accidents each year with most of such accidents caused because of negligent driving and lack of safety gear. In one such video that clearly explains the issue, a man in Kashmir who claims he has been driving cars for 10 to 12 years is seen struggling while using a seat belt.

The 49 second video that is going viral on social media shows a man being stopped by some traffic volunteers. While it is not clear where exactly the incident took place, it is for sure somewhere in Kashmir considering the accent of the man and the surroundings.

The man is asked by a volunteer to wear the seat belt. Ironically, the man, driving what seems is a Maruti 800 has no clue whatsoever how to wear it.

Amusingly he even tries to wrap it around his neck but cannot get the clip fixed.

The man again tries and is completely clueless how to wear it. He goes to say “Lagaya nahi kabhi (I have never used a seat belt).”

The man eventually leaves the scene saying that he is getting late.

The video signifies why so many accidents take place in Kashmir given that people are unaware of safety measures with many ignoring them deliberately.

According to WHO (World Health Organisation), use of rear seat belt reduces the probability of being killed by 25 percent and injuries by 75 percent. When examining the use of rear seatbelts in India, a 2017 study found that while a majority of the people surveyed were aware of the presence of seatbelts in their vehicles, only a portion of the population actually strap it on. A

s many as 713 people lost their lives in Jammu and Kashmir in road accidents last year, a figure which is eight times more than those killed by bullets in the conflict ravaged region, official data reveals.

As per the data compiled by the J&K Traffic Police Department, 5036 accidents happened in J&K from January to November in 2021, in which 713 persons were killed and 6447 were injured.

Pertinently, the deaths caused by road accidents in J&K in 2021 are much higher than those killed by bullets. The figures revealed in the Parliament recently stated that 75 people including 40 civilians and 35 security forces personnel were killed in militancy related in Kashmir in the year 2021 (upto November 31).