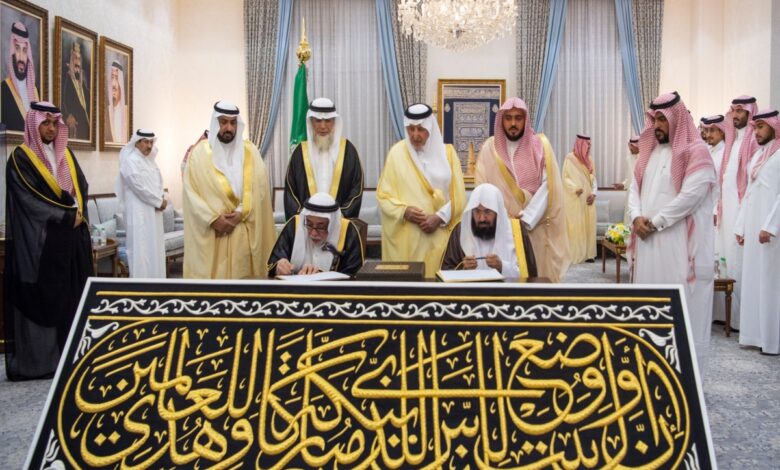 Advisor to the custodian of the two Holy Mosques, Prince Khalid Al-Faisal on Sunday handed over the Kiswa to Dr. Saleh bin Zain-ul-Abidin Al-Shaibi.

Dr. Saleh was accompanied by Dr. Abdurrahman Al-Sudais, the General President of the Affairs of the Holy Grand Mosque and the Prophet’s Holy Mosque. The ceremony took place at the headquarters of Makkah’s Principality in the holy site of Mina. Deputy Governor of the Makkah region, Prince Badr bin Sultan bin Abdulaziz was present during the ceremony.

Sending a message of unity, Saudi Arabia has decided to change Kiswa on the first of Muharram, marking the beginning of the new Islamic year.

This is the first time that the Kiswa was not changed on the Day of Arafat. The new Kiswa is generally draped on the Holy Kaaba on 9 Zul Hijjah, the day of Arafat every year.

Abdulhamid bin Said Al Maliki, the deputy general president for affairs at the King Abdulaziz Complex for Manufacturing the Kiswa al Kaaba, said the new covering would be draped over the Kaaba on the first day of Muharram instead of the ninth day of Dhu Al Hijjah, marking the beginning of the new Islamic year.

Media reports said in preparation for the Haj season every year, the authorities in Makkah raised the Kiswa (Ghilaf e Kaaba), the cloth that drapes the Kaaba by three meters, and covered the raised part with a two-meter-wide white cotton cloth (Ihram) on all four sides, an annual custom.

It is carried out as a precautionary measure to protect the Kiswa because pilgrims who touch or hold on to it during tawaf (circumambulation of the Kaaba) can damage the delicate material in the process.

The 14m tall garment has been prepared from pure silk fiber, embellished by gold and silver-plated thread and motifs illustrating verses from the Holy Quran.

An approximate — million riyals have been spent on the preparation of the Ghilaf-e-Kaaba by dozens of weaving experts at a special factory exclusively devoted to the manufacture of the Kiswa.