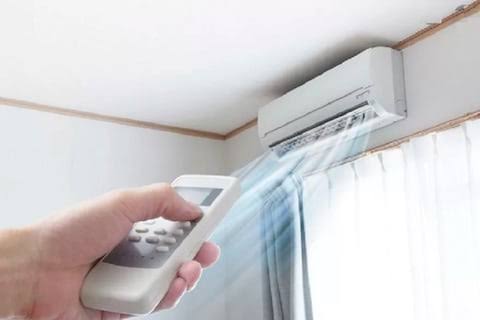 Srinagar: With scorching heat sweeping Kashmir, the demand for air conditioners (AC) has shot up manifold.

Sales of ACs, which were alien to Kashmir given its temperate climate, have more than doubled this summer.

Kashmir last week recorded the hottest day of the season so far as the mercury plunged to 34.3 degree Celsius.

Shafat Hussain Mir, the owner of Trade Center, which deals with the sale of ACs, told The Kashmir Monitor that for the first time there is a huge demand for air conditioners in the valley.

“Never before has Kashmir had such a huge demand for ACs. The weather is actually very hot and people prefer to buy AC to keep homes cool. My entire stock has been sold out. I am waiting for fresh stocks,” he said.

“For the last few days, the stocks have not reached Srinagar and customers are eagerly waiting to buy ACs,” he added.

Muneer Ahmad, another dealer said that the demand for ACs has almost doubled this summer. “We get orders from many districts. This heat wave is prevailing even in mountainous regions. Cooling appliances are in very much demand,” he said.

Ahmad said ACs are not now available in the market because of huge demand. “It is not a luxury anymore. It is a necessity for both summers and winters,” he said.

Saud, owner of Gree Air Conditioner said the ACs, which were mostly bought by hoteliers and the economically privileged class, are now becoming an appliance of necessity in Kashmir.

“Now this appliance is being bought for homes in Kashmir. Our business was down during the last two years of the pandemic. Post-lockdown, the demand has increased,” he said.

The demand for other colling appliances including fans, cooler, and refrigerators too has shot up in Kashmir this summer.

“We are witnessing a good sale of fans, fridges, and coolers this season. It is expected that the sales might go up further in July and August,” said Showkat Ahmad, a dealer.

Pertinently Croma’s Unboxed Summer 2022, has revealed that the purchase of air conditioners (ACs) has tripled, while that of refrigerators has doubled in 2022 as Indian consumers continue to pull all stops to keep cool this summer.