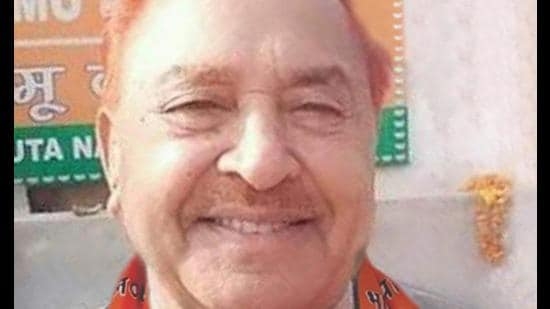 A former Jammu and Kashmir minister and veteran Bharatiya Janata Party (BJP) leader Thakur Puran Singh succumbed to Covid-19 on Thursday while being shifted to Chandigarh for treatment from Rajouri district, said a state official.

Around 85 years in age, Puran Singh was unwell for quite some time and had recently returned from Haridwar after attending a religious congregation. He will be cremated as per the laid down Covid-19 standard operating procedures (SoPs), the officer added. “He was being taken to Chandigarh for treatment but died enroute,” he said.

The official said that the leader’s body was brought to the Government Medical College Hospital, Rajouri, where further arrangements for cremation were being made as per the protocols.

Singh was a resident of Kewal Badhal in Rajouri’s Kotranka subdivision and was considered a prominent Pahari leader of the region. The veteran leader joined the BJP in 2014.

“He won as an independent and was a minister of state in the PDP-Congress government in 2002. In 2014, he joined the BJP and was a member of the state executive committee,” said Raina. Jammu and Kashmir was a state of the Indian union before August 5, 2019, when its special status under Article 370 was revoked by the parliament and it was divided into two union territories.