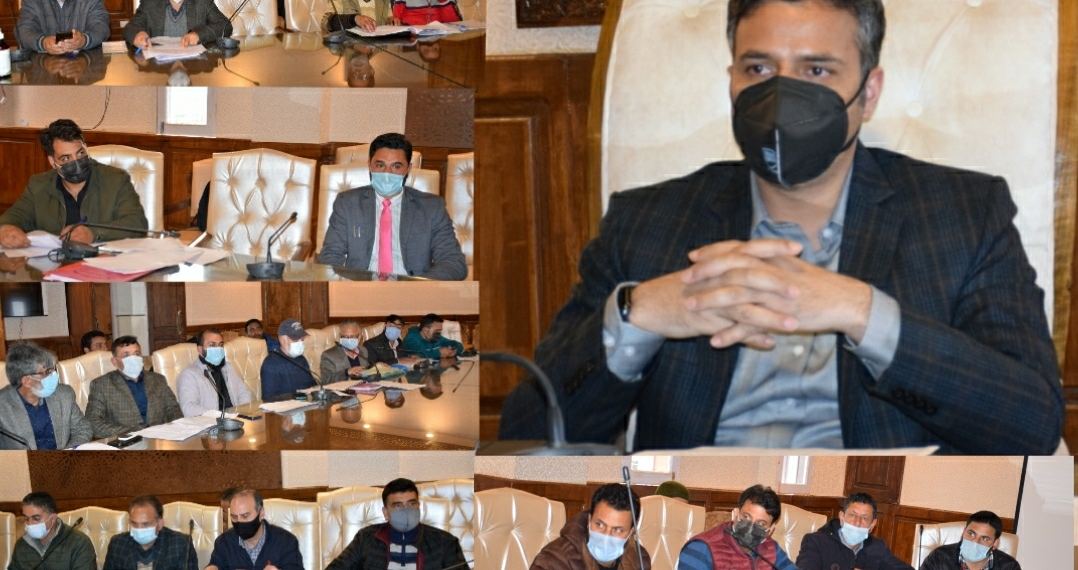 Kulgam: Deputy Commissioner Kulgam Dr.Bilal Mohi-Ud-Din-Bhat today chaired a meeting of officers here at the conference hall of the DC office to take the stock of physical and financial achievements made under District Capex, Area Development Fund, NABARD and other schemes.

He instructed the concerned officers to complete at least two Residential blocks at Loroo in all respects within a few days of the current month.

He also instructed to scale up the pace of work on all work projects which are under execution in the district and to complete all these projects within the stipulated time.

During the meeting, the Deputy Commissioner also reviewed physical and financial achievements recorded under District Capex, PRI grants and other schemes.

It was informed that out of 70 works which are under execution of R&B under district Capex and NABARD, Untied, NFB, 34 stands completed whereas various other works are at the final stage of completion.

It was further informed that in the health sector out of 74 works under PRI grants 72 stand completed.

Moreover, in elementary and secondary education, there is an expenditure of Rs, 1.54 crore against the releases of 2.51 crore.

He impressed upon the officers of PHE to ensure achievement of the target under Jal Jeevan Mission in due time.

The DC instructed the officers to double the efforts so as to ensure the completion of works that have been taken by these departments. He stressed making efforts on the ground to get 100 % expenditure of the releases. He urged to work religiously and to induce extra efforts to achieve the desired results.

The meeting was attended by CPO, Executive Engineers from PHE, PDD, R&B, Irrigation, CEO, CMO and other officers.