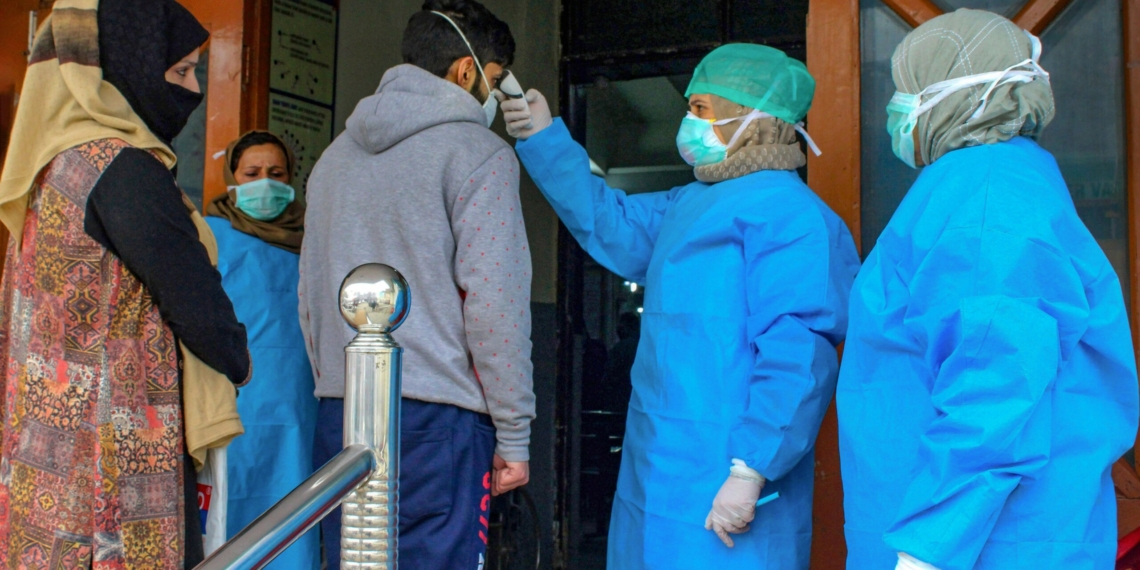 Srinagar: Doctors wearing protective gear scan visitors at the entrance of a hospital in wake of coronavirus outbreak, during the nationwide lockdown, in Srinagar, Thursday, April 2, 2020. (PTI Photo)(PTI02-04-2020_000174A)

Srinagar: Covid is rearing its head again in Jammu and Kashmir.

Jammu region is more affected by COVID-19 where 112 out of a total of 165 positive cases were reported.  Before it, the average number of daily positive cases in June was 60.

What is worrying is that the cases are increasing without any substantial increase in the testing rate.  As per the figures, the daily testing rate has fallen by more than 25 percent in the last two weeks. Compared to 11548 tests conducted daily, only 8539 people were screened on July 14.

Doctors believe that cases could be much more as people are not coming forward for tests. “The symptoms currently are mild. It could be an Omicron variant as the infected person recovers in just three to four days. And it doesn’t require hospitalization,” said  Prof Mohammad Salim Khan, Head, Department of Community Medicine, GMC, Srinagar.

He said that people should mandatorily wear masks and follow SOPs to remain safe from the disease. “Masks should be made mandatory again and people should follow the SOPs as soon as they move out of their homes,” Dr. Khan said.

Directorate of Health Services, Kashmir, spokesman Dr. Mir Mushtaq Ahmad told The Kashmir Monitor that they will increase the rate of testing throughout the valley.

“Testing depends on the presence of the disease. We are identifying the vulnerable spots and accordingly, tests are done. In the coming days, more tests will be done as the disease has shown a surge in Jammu and Kashmir,” he said.

Dr. Mushtaq said Ministry of Health and Family Welfare guidelines should be followed in letter and spirit.

“This is now a universal disease and directions have been already passed to the people to follow the Covid Appropriate Behaviour. People must take precautions and help the administration to contain the spread of the virus,” he added.