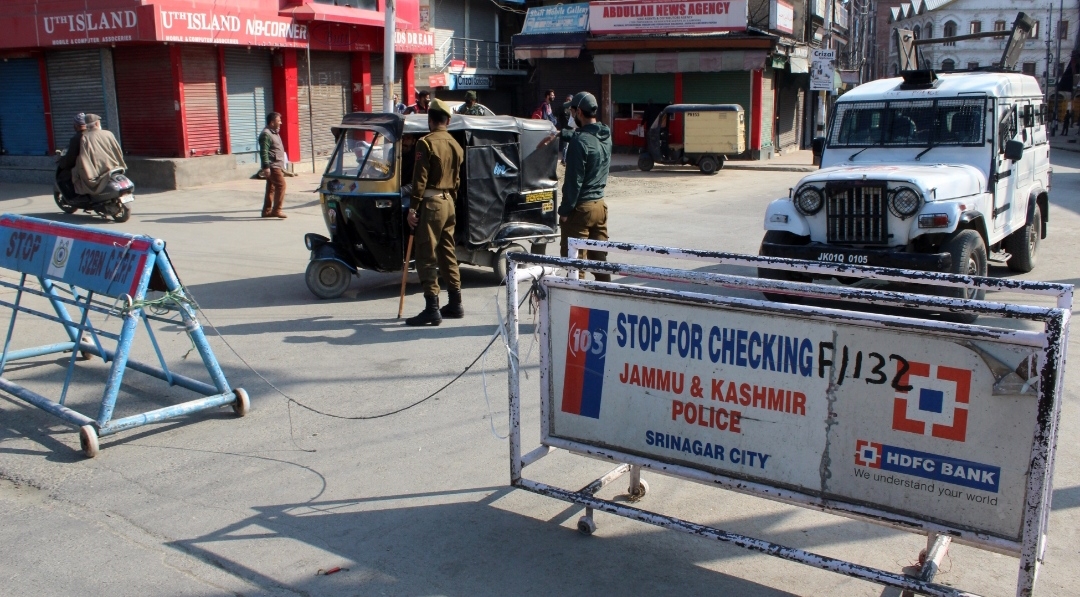 Srinagar, Mar 20: In a first, Kashmiris fully concurred with the government imposed lockdown in the valley on Friday to contain the deadly coronavirus that till date has devoured over 10,000 lives globally.
Most business establishments remained shut while people ensured to remain indoors, heeding the directions from the authorities that had decided to impose tight restrictions across Kashmir.
The measures were taken after a 67-year-old woman from Khanyar area of the city, who had returned on March 16 from Saudi Arabia after performing Umrah, tested positive for COVID-19.
Restrictions were imposed on the movement and assembly of people across all districts of the valley as a precautionary measure to contain the spread of the coronavirus, the officials said.
They said security forces were deployed and barricades, including concertina wires, put up at several places in Srinagar and other places to enforce the restrictions and curtail the movement of people.
Only government and essential services employees with valid identity cards, mediapersons, and emergency cases were allowed to move, they added.
The police used vehicles fitted with public address systems to announce the restrictions in the morning and asked the people to stay indoors and maintain social distancing, the officials said.
Shops, petrol pumps and other business establishments were shut on Friday in most parts of the valley, while public transport was also suspended, the officials said.
The authorities have suspended the train services on the Banihal-Srinagar-Baramulla axis after reports of overcrowding of the trains which was making screening of the passengers difficult.
Educational institutions across Kashmir have already been closed, while all public places including gymnasiums, parks, clubs and restaurants have been shut down.
As the infected person was not placed under any quarantine or isolation upon her return, the authorities had to seal off the entire neighbourhood of Khanyar falling within 300-metre radius of her residence.
Several relatives of the infected woman who had primary contact with her were advised to undergo tests while others, who might have had secondary contact with the patient, were asked to undergo self-isolation for two weeks.
In efforts to contain spread of the infection in Srinagar district, the administration constituted and activated 21 medical teams on Thursday for holding house-to-house inspections and collecting data in and around the area where the infected person resides.
Srinagar Mayor Junaid Azim Mattu Friday said 12 squads with 60 team members have been pressed into service for mechanized and specialized sterilization of those neighbourhoods where individuals with travel history to COVID-19 affected countries might have had exposure.
Mattu said hundreds of the teams from Srinagar Municipal Corporation continued to remain deployed around the city for sterilizing mosques, public venues, markets, lanes, by-lanes and all vulnerable locations.
He has advised people to avoid Friday congregational prayers.