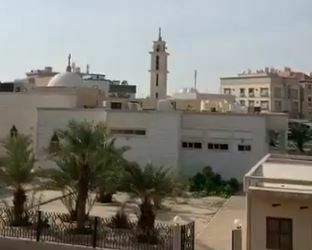 The muezzin, or person who calls for the Muslim prayer, would continue to make the call, authorities said. But instead of “haya alas salah” (come to pray), which is typically announced, worshippers were instructed to: ‘As-salatu-fi-buyutikum’ (pray in your homes).

Authorities in Kuwait have temporarily closed mosques and amended the adhan, the Muslim call to prayer, to include the words “pray in your homes”, as the country struggles to contain the spread of the deadly coronavirus, media reports said.

Kuwait’s Ministry of Awqaf and Islamic Affairs announced on Friday that the five daily prayers usually held at mosques had been cancelled, while several social media videos showed that the adhan was now instructing worshippers not to come to mosques for congregational prayers.

The muezzin, or person who calls for the Muslim prayer, would continue to make the call, authorities said. But instead of “haya alas salah” (come to pray), which is typically announced, worshippers were instructed to: ‘As-salatu-fi-buyutikum’ (pray in your homes).

The changes are in effect until further notice, the religious ministry said.

The outbreak of the disease – officially known as Covid-19 – was labelled a pandemic by the World Health Organisation (WHO) on Wednesday, as the worldwide death toll from the virus continues to grow. Total cases have surpassed 142,918 across 136 countries.

Earlier this week authorities in Kuwait announced a public holiday from 12 to 26 March, with work resuming on 29 March, but entities providing vital services have remained open.

A halt on all commercial flights to and from Kuwait City International Airport also took effect on Friday. The flight ban, which does not include cargo flights, will continue until further notice.

Only flights carrying Kuwaiti nationals and their “first-degree relatives” will be allowed in, a government spokesman said earlier this week.

Kuwait had reported 100 cases of the coronavirus as of Friday, five of them have recovered. No deaths have been reported.

The number of new cases in the Middle East surpassed 11,000 people on Thursday. Almost every country in the MENA region, except Libya, Mauritania, Syria and Yemen, have confirmed cases of the new coronavirus.

Last month, neighbouring Saudi Arabia put a temporary ban on foreigners entering the country for Umrah pilgrimages to the Muslim holy cities of Mecca and Medina. It extended that ban to Saudi citizens and residents last week.

Mecca’s Grand Mosque was temporarily closed earlier this month, so no prayers could be conducted in Islam’s holiest site. Though the mosque has partially reopened, worshippers are forbidden from touching the sacred Kabaa at its centre.

No confirmation has been given by the Saudi authorities as to whether the coronavirus outbreak will affect the annual Hajj pilgrimage set to take place in July.