Civilian traffic to be restricted during convoy movement: Rajnath 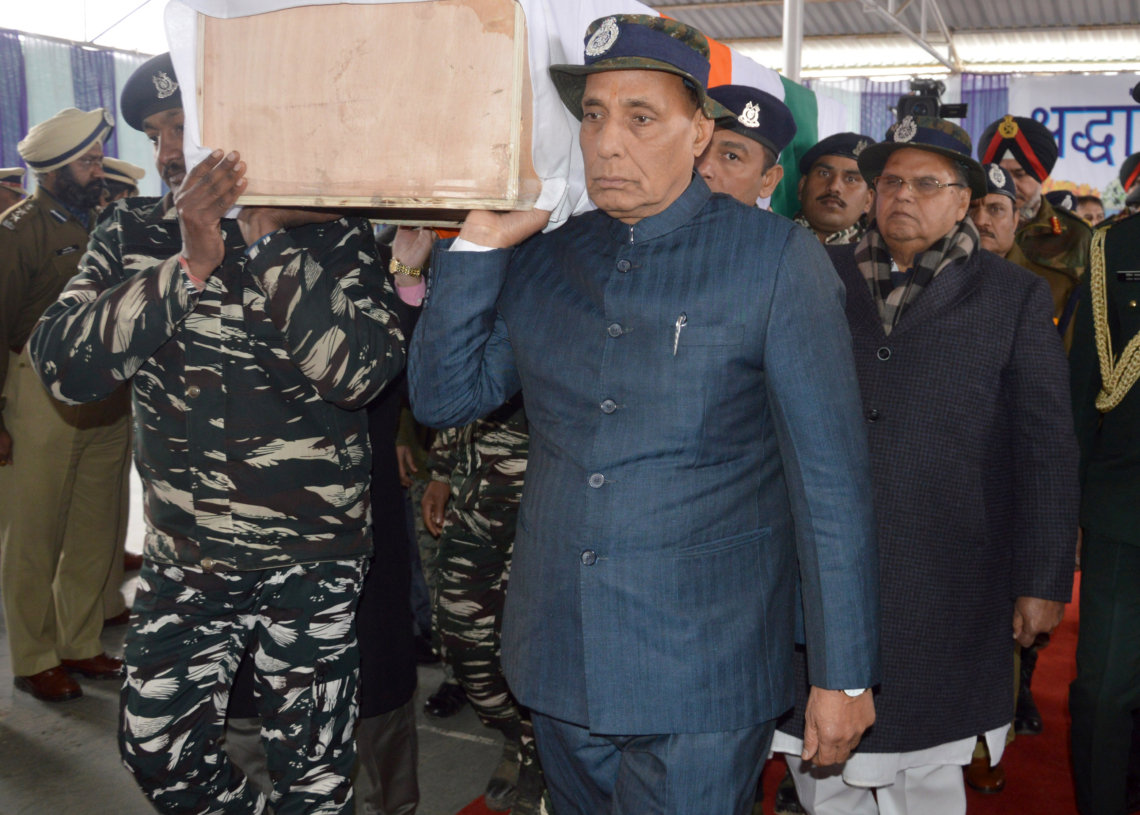 Srinagar, Feb 15: Home Minister Rajnath Singh Friday helped carry the coffin of one of the slain CRPF personnel after he laid a wreath on the mortal remains of the troops, who were killed in a suicide attack in Kashmir on Thursday, officials said.
Shortly after arriving in Srinagar from Delhi, the home minister attended a solemn function here where the mortal remains of over 40 CRPF personnel were kept in coffins, draped with tri-colour.
Singh helped carry the coffin of a slain CRPF personnel before it was flown out of J&K in a special aircraft.
Apart from Rajnath, J&K Governor Satya Pal Malik, Home Secretary Rajiv Gauba, CRPF Director General R R Bhatnagar, Jammu and Kashmir DGP Dilbagh Singh besides others attended the wreath laying ceremony.
“The nation will not forget the supreme sacrifice of our brave CRPF jawans. I have paid my last respects to the martyrs of Pulwama. The sacrifice will not go in vain,” Singh said.
The dignitaries stood in silence till the coffins were loaded in a truck which went to the Srinagar airport, the official said.
Later during a press conference, Rajnath Singh said that he has asked the officers to review the security provided to people “taking money from Pakistan and its intelligence agency ISI.”
In an apparent reference to separatist leaders, Singh, according to news agency ANI said: “There are some elements who are hand in glove with militant organisations, and ISI across the border. They are involved in conspiracies too. They are toying with the future of the people, especially the youth, of J&K.”
“There are some elements here who take money from Pakistan and ISI. I have told the officers that the security provided to such people should be reviewed,” he said.
The Home Minister also called for restricted “civilian traffic” on the highways during the movement of the convoys of the security forces.
“Civilian traffic movement will be restricted for some time during movement of army and security forces convoys. This may cause inconvenience and I apologise for this but this is necessary for safety of jawans,” Singh said after heading a high-level security review meeting.
At least 49 Central Reserve Police Force personnel lost their lives in Pulwama attack in which a convoy of 78 vehicles of the force was targeted. Militant outfit Jaish-e-Mohammed claimed the responsibility for the attack and released a video of the suspected attacker, which it identified as a local youth.