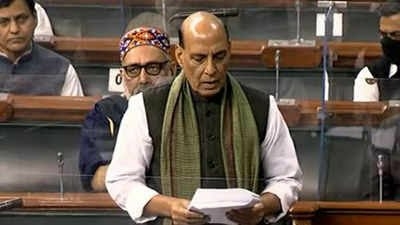 NEW DELHI: Defence minister Rajnath Singh on Thursday expressed deep condolences in Parliament over the unfortunate death of Chief of Defence Staff General Bipin Rawat and 12 others, who were killed in a military chopper crash in Tamil Nadu on Wednesday.

During his statement in Lok Sabha, he said that the Centre has ordered a tri-service inquiry into the tragic chopper crash incident. The probe will be headed by Air Marshal Manvendra Singh, Air Officer Commanding-in-Chief Training Command.

The defence minister in his statement added that efforts are also being made to save Group Captain Varun Singh who survived the fatal crash, admitted to Military Hospital in Wellington remains on life support.

He could be shifted to Command Hospital in Bengaluru for further treatment.
Lok Sabha Speaker Om Birla also paid tribute to the late defence chief. “Rawat had worked a lot towards bringing in reforms in the system and would be remembered for his dedication,” he said in a statement he read out in the House.

A two-minute silence was also observed in the lower House as a mark of respect for the deceased.

In honour of General Bipin Rawat and the soliders who died in the helicopter crash, the opposition members decided to not protest the suspension of 12 Rajya Sabha MPs.
The mortal remains of the Late Chief of Defence Staff and 12 others will be brought to the national capital in the evening. The last rites of General Rawat will be performed with full military honours.

13 of the 14 people on board the military helicopter ( Mi-17V5) died in the crash near Coonoor in Tamil Nadu on Wednesday afternoon.