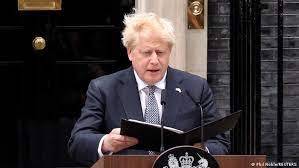 “I will serve as the prime minister until a new leader is in place,” Johnson said in his address.

This comes amid calls for the appointment of an interim PM growing stronger within Johnson’s political party.

Shortly before resigning, the leader appointed a full replacement Cabinet, with James Cleverly’s appointment as the new Education Secretary being among the latest.
Johnson told the nation at lunchtime that he was resigning as Conservative Party leader and will step down as Prime Minister later this year once his successor is in place.

But in a letter to Sir Graham Brady, the chairman of the 1922 Committee of Tory backbench MPs, Sir John said: “The proposal for the Prime Minister to remain in office – for up to three months – having lost the support of his Cabinet, his Government and his parliamentary party is unwise, and may be unsustainable.”

He added: “For the overall wellbeing of the country, Mr Johnson should not remain in Downing Street – where he is unable to command the confidence of the House of Commons – for any longer than necessary to effect the smooth transition of Government.”

Sir John offered two alternative ways forward as he said Dominic Raab could replace Mr Johnson as an acting PM or a new Tory leader could be rapidly “elected solely by MPs” to allow them to take power swiftly, with the winner “then endorsed” by Conservative Party members.